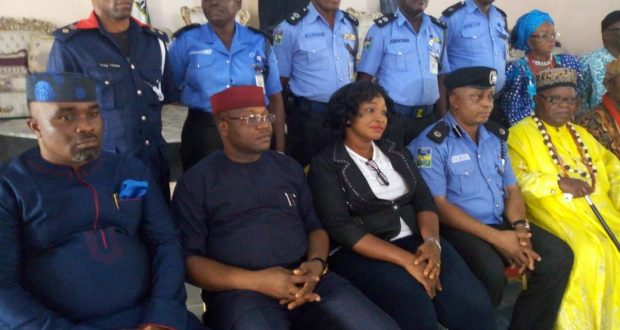 You Are Like Pastors, Not Warriors – Imoh Okon Tells Nigeria Police Force

The Executive Chairman of Uyo Local Government Council, Elder (Hon.) Imoh Okon has told men of the Nigeria Police Force to see their policing job as a Peace keeping mission and not a warfare, noting that like Pastors, Police are supposed to be propagating and upholding peace in the society and not to cause, promote or fight war as if they are warriors.
The Chairman stated this while speaking with a delegation of Police Officers led by the newly posted Uyo Area Commander, Victor Chilaka who paid a familiarization visit to the Chairman in his office yesterday.
“You people are like pastors, your core objective, I think, is supposed to be that of propagating and maintaining peace and order, not to act like warriors. It’s not every time or everything that Police should be using force as if they are fighting war, No. At times, you have to adopt peaceful measure in handling some cases because we are in civilian government,” the Council Boss said.
While welcoming the Police Officers, the Chairman said the role of the Police Officers in maintaining peace and order in the society cannot be ignored by the wave of hand and therefore thanked the officers for always being on top of security situations, particularly in Akwa Ibom State at all time.
The Chairman further called for a good working relationship between the Uyo Local Government Council and the Police Force, saying that it is only through such relationship that security of lives and properties in Uyo Local Government, particularly the rural areas can be assured.
He decried the increasing state of cultism in Akwa Ibom State and therefore called on the new Area Commander to rise to the task of fighting cultism in the state to minimum.
Earlier, the new Area Commander thanked the Chairman for warmly receiving him and his team, saying that though he is new in the state capital, he is aware of the  excellent performance of the Chairman within his two months in office.
He also promised to work hand-in-hand with the Chairman as the Chief Security officer of Uyo Local Government, even as he pleaded with the Chairman for optimum support throughout his stay in Uyo Area Command.
Meanwhile, a committee to oversee peace and Security in Uyo Local Government was yesterday inaugurated by the Chairman of Uyo Local Government Council, Elder Imoh Okon.
The Committee which is called Uyo LGA Security and Peace Committee is headed by the Chief Security officer of Uyo Local Government, Elder Imoh Okon and has the Vice Chairman, Uyo Area Commander, all DPOs in Uyo, Chairman of Uyo Traditional Rulers Council, Chairman Chapter of National Youth Council and Secretary of Uyo Local Government Council as members.
Speaking shortly before inaugurating the committee, Elder Imoh Okon said the committee is in line with the 2017 Local Government administration Law.
According to him the committee is expected to  promote, peace security and stability of the Local Government.
Other functions include initiation of early warning and diplomacy in the Local Government, peace making including the use of good offices, mediation, reconciliation and enquiry, peace building and post conflict reconstruction, humanitarian action and disaster management as well as such other functions as may be assigned to it by the Council.
While urging members of the committee to see the committee as a platform to serve the people of Uyo, the Council boss prayed God to give the committee the required wisdom to discharge their expected duties.
The inauguration took place at Uyo Traditional Rulers Council and was attended by all village heads, Uyo Local Government security Chiefs, village youth presidents, Leader of Uyo Legislative Council and his Councilors, Head of Service among others.
2018-02-17
dozzier