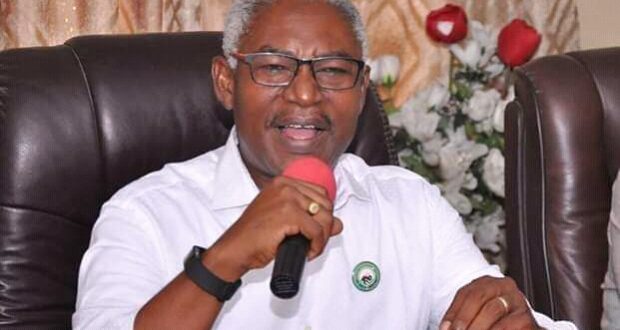 Write With Wisdom, Nsima, Akpabio And Udom Have Made It In Life ~ Arc Nya-Etok Advised journalists

The initiator of Social governance ideology (SGI) and the governorship candidate of the young Democratic Party (YDP) in the March 2019 general election in Akwa Ibom State. Arc. Ezekiel Nya-Etok have advised pen professionals in Akwa Ibom to deceit from all forms of character assassination in their reportage.
The social housing advocate, gave the advices during an interactive session with newsmen in uyo recently where he spoked on the concept of social governance as a panacea for a sustainable development call on the government to embrace the ideology to build an egalitarian society for all.
Nya-Etok who spoked extensively on the March governorship election said he refused to challenge governor Udom Victory at the tribunal because he believed in good governance rather than personal gains, charge journalists to apply wisdom in their Constitutional duties not to ruin their future for a peanuts, but consider the collective interests of Akwa Ibom people above the political class, noting that all our leaders have various achievements within and outside the country to their credit.
The principal partner of novone consult limited, an Estate management firm, call on government at all levels to develop modalities on how to achieve a sustainable empowerment programmes for the citizens to help reduce high level of poverty in the state. Said priority should be given to small and medium scale enterprise to help the vulnerable people mostly in our rural communities.
The Ikot Ekpene born architect use the opportunity to pour encomium on the federal government on their timely intervation on housing deficit in the country by partnering with him in the ongoing novone social housing estate phase one, in Ikot Ntuen, which according to him work is at advance stage of completion with modern facilities. He maintaind that the estate is targeted for middle income earners in the whole of South south geo political zone.
The housing consultant, appreciate God for his global recognitions, attribute it to his inputs to humanity, calls on Akwa Ibom people to pray for governor Udom to succeed, because if he fails to do what is right, Akwa Ibom people will fail in general he explained.