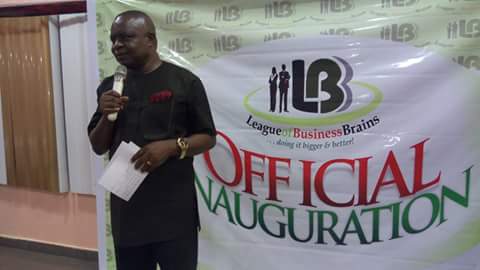 The Chairman Nigeria Union of Journalists, Akwa Ibom State Council, Elder Patrick Albert has identified reasons why most businesses owned by Akwa Ibom people fail.
Speaking at the inauguration of the League of Business Brains in Uyo on Sunday, the State NUJ chairman noted that the reason why most businesses owned and managed by Akwa Ibom State indigenes fail may not be unconnected to the fact that such businesses lack creative ideas to thrive.
He said that a situation where someone venture into a business simply because he sees a person engage in the business but fail to make the venture distinctive with ability to provoke need for it, he may not surpass who he looked up to thus reason for a potential failure.
Quoting from Suze Orman, Elder Albert stated      ” ‘In all realms of life, it takes courage to stretch your limits, express your power, and fulfill your potentials. It’s no different in the financial.’ So, for any business to succeed, it is important that our people start thinking beyond the box. Honestly, idea is superior than money. You can have the money to start a business but it is superior ideas that will make your business outstanding. You must look for creative ways to make your business which is a service you render to have a unique selling point. With that, businesses in this State especially the ones owned by indigenes will thrive.” While expressing displeasure over the ebb of enterprising spirit among Akwa Ibom people, the State NUJ helmsman offered insight to the fact that there is still room for improvement especially as the present administration under the leadership of Mr. Udom Emmanuel has expressed determination through the Dakkadda Philosophy to rekindle the enterprising spirit.
He pointed out that for the economy of the State to improve, it was time for the people to shift attention from politics to economy, stressing that with a healthy economy, people will be rightly disposed to make informed decisions on politics, hence better the society.
He added ” The words of Napoleon Hill can be very helpful to our businessmen. Napoleon once said: Whatever the mind of man conceive and believe, it can achieve. Thoughts are things. And powerful things at that, when mixed with definiteness of purpose and burning desire, it can be translated into riches. So our businessmen simply need powerful ideas.”
Elder Albert advised the League of Business Brains to ensure they realize their dreams through powerful thinking occasioned by concrete effort to seek God’s wisdom. He pledged his readiness to always support the business group with ideas that will skyrocket them.
Earlier the President of League of Business Brains, Mr. Ice Dondaniels noted that the organization is a club of entrepreneurial community of professionals established to provide what he described as high quality networking programmes for business people who are interested in expanding bilateral commerce.
He pointed out that their mission includes: creation of a strong middle-class economy and leverage on the investment policy drive by the State Government, synergize businesses and ideas in a way that will be of mutual benefit for intending investors and individuals of quality business ideas among others.
2017-06-14
dozzier