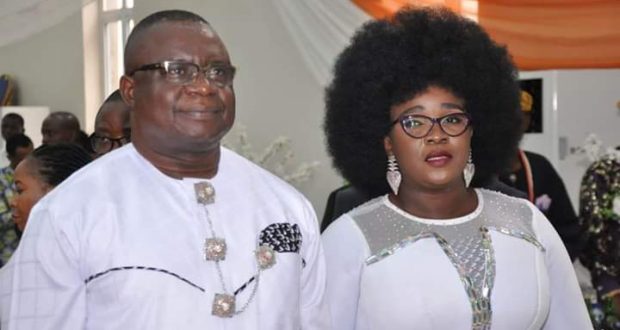 It was a weeklong affair. All stops were pulled to give the departing five-star, jinx breaking NUJ helmsman a befitting farewell that befitted his stature.

At any rate, the swansong events served to reinforce the well known fact that he is a man of many firsts. Others came, served and left without a bang or so it seems, but not for Elder Patrick Albert who brought a breathe of fresh air to the Akwa Ibom State council of the Nigeria Union of Journalists.

As he braced up to end a six-year stint which began on August 1 2013, Elder Patrick Albert, a widely travelled fellow especially during his rookie years in the pen business, looked a man in cloud nine all through his dying days in office as he relished the rollercoaster and topsy turvy six years he held sway as Akwa Ibom State chief pen man.

To round off his two-term on the saddle, Patrick, an ex-minor seminarian, took his family to Four Square Gospel Church on Sunday July 28 to thank God for guiding him through his six success laden years as NUJ boss.

As would be expected, a coterie of guests, comprising journalists, the political class, friends, well-wishers and more, joined him in the service to celebrate with a man who came, saw and left indelible imprints on the sands of time.

When it was time for the man of the moment to thank God, he did so in an emotive manner that truly captured how grateful he was to His Maker. Unable to contain his deep feelings on the day, Patrick knelt in adoration as he sang with all the strength and passion he could summon. It was a moving scene indeed.

When he spoke, he began it like this: “Today is indeed a day of great joy for me, the outgoing state EXCO of NUJ and my family.
This is one great outing that I will enjoy the full complement of my family,” he said amidst smiles.

While stating that being the chairman of NUJ is line conducting a choir of 1000 singers, he pointed out that there’ is no level of leadership that is small.

Speaking on his voyage to the NUJ top seat, he said he was unwilling to undertake the journey, but only threw his hat into the ring after due consultation with God which featured unceasing prayers and fasting. He also recalled how tricky it was dueling for the top seat with Joe Effiong, a man he said helped him become Chairman of Pioneer Chapel.

Moving forward, he wished his successor betters his record, even as he heaped praises on some persons including Edidiong Udobia, Tony Anichebe, Ephraim Ikpe, among others, for their loyalty and outstanding support to him from the word go.

Elder Albert paid tributes to ex-governor Godswill Akpabio, who in collaboration with then Commissioner for Information, Aniekan Umanah, he said, doled out a seed support of N100 million for the ongoing two-storey office complex at the new-look Press Centre.

While also commending Governor Emmanuel for his immense support to the Union, he described the former bank chief as a man after God’s heart. Patrick did not end his emotion laden speech without showering encomiums on the Paramount Ruler of Uyo, Edidem Sylvanus Okon, for his invaluable support towards helping him rid the NUJ complex of a shrine that had abided there for donkey years.

Part of activities marking his exit as NUJ chairman was a facility tour by some journalists to Champion Breweries, Uyo. At the event which was both engaging and worthwhile, saw members of the fourth estate of the realm being conducted round the different departments in the company.

The MD of Champion Breweries, Mr. Patrick Ejido, who was on hand to welcome the NUJ team to the company, said Champion has as its credo, “safety first”.

Having ditched the use of diesel in embrace of a gas powered generator for electricity, a refurbished canteen for staffers, a serene environment with strict adherence to discipline and best practices, a modernised and well equipped health facility plus efforts to spread its tentacles to other parts of the country like the South East, Mr. Ejido said the aim of the company is to be world class.

Elder Patrick Albert who said he has always followed activities of the company with keen interest including when it boomed and the time it made to kiss doom, commended Mr. Patrick Ejido for his efforts in upping the ante at Champion Breweries, noting that the memory of the facility tour will linger.

A football match was played later in the day between NUJ and staff of Champion Breweries at Uyo township stadium. As a fitting gift to Elder Albert, the NUJ team won the match by a lone goal scored by the oft potent boots of Ubong Inyang.

The apogee of the events held on Wednesday July 31 at the sprawling Watbridge Hotel and Suites, Uyo.
It was a Colloquium/Session of Tributes & Luncheon to celebrate the excellent stewardship of Elder Patrick Albert and his EXCO.

Leading a long list of attendees was Commissioner for Works and Grand Patron of NUJ, Zone F (South South), Akparawa Ephraim Inyang-eyen. Also in attendance was the National Chairman of NUJ, Comrade Chris Isiguzo who announced the appointment of Elder Patrick Albert as Member of National Conference Committee of NUJ. He said the Union will continue to work closely with Patrick given his rich vein of wisdom, intellect.

Chairman on the occasion was the irrepressible, intellectually savvy and stylish Prof. Effiong Johnson of the Faculty of Arts, University of Uyo, who, along with the representative of the deputy governor, Mr. Ekikere Umoh, Akwa Ibom Information boss, Sir Charles Udoh, among others, all had kind words for Patrick Albert.

A lecturer in the Department of Communication Arts, University of Uyo, Dr. Nsikak Idiong, presented a keynote address on the theme: “Capacity Leadership: The Patrick Albert Example. He delivered the paper with characteristic verve.

Speaking frankly and emphatically of the persona of Patrick Albert, Akparawa Ephraim Inyang-eyen, who bagged an excellent award from Albert, said: “Why I avail myself to celebrate Patrick Albert is because of what I discovered about him. When he came to me the first, second and third time, he came with the story of NUJ. It was the third time I said let me come and see what you are doing.

He didn’t remember to ask for anything for himself. After showing the projects he was doing, I resolved that with my little might, I will stand with him because he has the interest of the community at heart. I discovered that he is not a leader who is concerned about himself but the larger community. That is what is lacking today among leaders. When you think more of what accrues to you, the job suffers.”

An elated Patrick, in his response, pledged to keep faith with the ideals he is known for, while expressing effusive appreciation to all who came to honour him.

Elder Patrick Albert, father. Mentor. Teacher and pace setter, in rounding off his speech, borrowed apostle Paul’s evergreen line in 2 Timothy 4:7: “I have fought the good fight, I have finished the race, I have kept the faith”.

Previous: Governor Udom will Completes All Ongoing Projects ~ Inyang-Eyen Boast.
Next: Chairmanship of House Committee is not a Requisite for Effective Representation – Henry Archibong