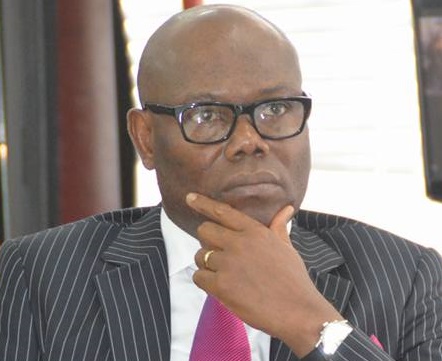 Udom has not performed below expectations – Akan Okon, Charles Udoh

In appreciation of his sterling accomplishments in entrepreneurship since assumption of office, youths of the Dakkada Multi-purpose Co-operative Societies Limited, have thrown their weight behind Governor Udom Emmanuel’s reelection bid.
The latest, is that the youths have vowed to mobilise a total of 500, 000 votes to ensure
the Governor’s return to Hilltop Mansion, in 2019.
Project Supervisor, Dakkada Multi-purpose Co-operative Limited revealed this, yesterday, at a New Year Get-together of the body tagged, “The Beginning of a Successful Year”, held in Uyo, Akwa Ibom State Capital.
Continuing, Uwah who doubles as the Special Assistant to the Governor on Marketing and Brand Management, said the youths of Dakkada Co-operative Societies were proud to identify with the industrialisation strides of the State Chief Executive, and pointed out that Mobilisation of votes will be done with support from the Directorate of Marketing and Brand Management.
“With the support of the Directorate of Marketing and Brand Management, we are using this platform to mobilize 500,000 votes for His Excellency, come 2019.
“It would have been a thing for the apex Cooperative to do, but since the youths are the ones readily available to run around, the the youth wing will, with immediate effect, this January, start mobilisation of votes, for His Excellency in 2019”, he said.
Speaking further, Mr Uwah showered encomiums on Governor Emmanuel for working tirelessly to actualise the core mandates of his administration, saying by leveraging on the vast potentials in the agricultural sector, the Governor is committed to eliminating hunger in the State.
He announced that members of the Co-operative have been trained in areas such as Co-operative management, basic accounting skills, palm oil development and maize seedling cultivation, and thanked members for their cooperation and unity, in 2017.
Uwah who also cited the disbursement loans, distribution of over one ton of improved specie of yellow maize and access to agricultural inputs, as some achievements of the Co-operative, described the body, as a fulfilment of the Governor’s poverty alleviation programme, and sued for more support for the Governor’s reelection plan, to enable him record more giant strides.
Also speaking at the event, the Commissioner for Housing and Special Duties, Mr Akan Okon, lauded Governor Emmanuel’s foresight at establishing the Dakkada Co-operative Society, pointing out, it has helped boost agricultural and business activities in the State, especially, among youths.
While thanking members of the Co-operative for embracing the programme,
the Commissioner expressed happiness at the Co-operative’s growth level, hinting that rather than beg for a living, members of the Co-operative were earning ameaningful living through through agriculture.
“Our people do not beg for a living, but do things to earn a living, it all started as a joke when the Coordinator of this programme came up with this idea. When we sat down to discuss, we saw that it is a thing that is good for Akwa Ibom Children that requires a push.
“The Governor has not performed below expectations, today, I am amazed at the growth of the Dakkada Multi-purpose Co-operative Association and I am proud to associate with you”, the erstwhile Finance Boss said.
Mr Okon who urged members of the Co-operative Societies to remain hardworking and united, described the New Year Get-together as a show of appreciation to the Governor’s entrepreneurial drive and prayed for more blessings on them.
He advised members to access micro credit schemes provided by the State Government, saying Governor Udom Emmanuel will never relent efforts at ensuring that youths in the State are taken off the streets and given a sustainable means of livelihood.
On his part, the Commissioner for Information and Strategy, Mr Charles Udoh, praised the Project Supervisor, Dakkada Multi-purpose Co-operative Association, Mr Ime Uwah, for his ability to interpret the Governor’s dream for young entrepreneurs in the State, adding the Governor has reduced youth restiveness in the State through Co-operative Societies.
While thanking the organisers of the event, the State Information Boss said Akwa Ibom is blessed to have a visionary leader as Governor, noting through the Dakkada Philosophy, Governor Emmanuel has successfully re-written the stories of Akwa Ibom youths for good.
To continually enjoy more value oriented governance, Mr Akan Okon urged members of the Co-operative, to cue behind the Governor Emmanuel’s second term agenda, maintaining the Governor has not disappointed the people in his first term, despite limited resources.
Chairman on the Occasion, Barr. Ofonime Enoh, in his opening remarks, thanked Mr Ime Uwah for encouraging youths in the State, to embrace entrepreneurship, saying the development of the State is dependent on them.
“I came to remind youths that there are possibilities in agriculture, there are potentials in agriculture, there are billionaires because of their involvement in
agriculture, the development of this State depends on the youths. I call on all the youths in the State, to key into this vision”, he stressed.
The Dakkada Multi-purpose Co-operative Societies Limited is an initiative of Governor Udom Emmanuel, geared towards establishing a proper and effective system for strategic co-ordination and marketing of agricultural products churned out by subsistence farmers, to attain commercial quantity.
Those who graced the event included Senatorial Districts and local government co-ordinators of the Co-operative and members across the State.
2018-01-06
dozzier

Previous: I struggled to get Joke Silva, did not snatch her from any man – Olu Jacobs
Next: Emir Sanusi Lamido Sanusi To President Buhari: