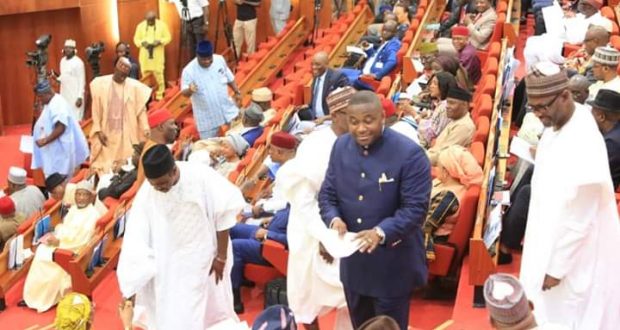 We Wanted To Appreciate the President On Senator Akpabio’s Appointment.

The Chairman, Akwa Ibom State Caucus in National Assembly, Senator Bassey Albert (OBA) has called on the ministerial nominee from Akwa Ibom State, Senator Godswill Akpabio to “pursue reconciliation and healing” as a panacea to bring the much needed federal government presence to the State.

Senator Albert, speaking on behalf of the three senators representing Akwa Ibom State in the Senate made the call Wednesday 24th July, 2019 after Senator Akpabio was screened by the Senate.

On why the senators sought to speak on the nomination of Sen. Akpabio, Senator Albert said given the capacity of the nominee from Akwa Ibom, the Senators from Akwa Ibom State should have been given the opportunity to appreciate the President for appointing Senator Akpabio as a minister as well as solicit his support to work with the Governor of Akwa Ibom State, -Mr Udom Emmanuel to develop the State and to attract the much needed federal government presence to Akwa Ibom.

“But in the wisdom of the Senate President my leader, he felt that the comments of the Senate Minority leader would suffice”, he said.

He further remarked: “What We wanted to say is for him Senator Akpabio to pursue reconciliation and healing considering the circumstances surrounding the outcome and fallout of the last general election, and to support President Buhari to realize His Vision for a better Nigeria.

“This is time for governance not politics”, he opined and stressed the need for all to work together for the common good of our people.

On whether the nomination of Senator Akpabio for the post of a minister will once again trigger off power struggle in the state, Senator Albert said that every politics is local, stating that power belongs to God and resides in the people not with the Governor, not with the Minister, not with the Senator. “But this is time for governance. We should wave politics aside please “, he said, adding that when 2023 comes, God and the people of Akwa Ibom State will once again decide.