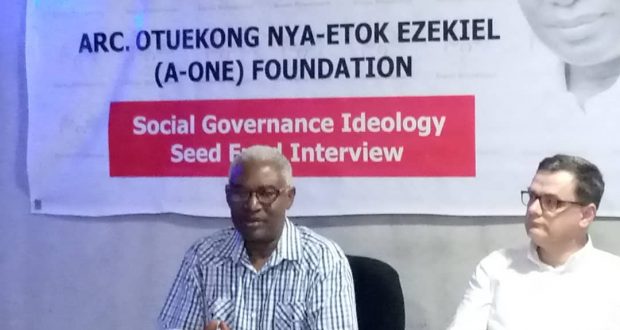 A renowned housing expert in the country, Architect Ezikel Nya-Etok have assured Akwa Ibom people that he is working assiduously in ensuring that people have value in all the apartments they would paid for in his Dream Garden Estates located at Ikot Ntuen Nsit Along Abak road in Uyo.

The progenitor of Social Governance Ideology who was accompanied by his business partner, Mr. Mitchell from Poland handed this down during and interactive session with newsmen in Uyo, Nya-Etok explained that the housing will be one of the best estate in the country going by its quality and standard used in erecting the structures, he noted that the project which is operating on a public private partnership (PPP) between him, the federal and state government is aimed towards making social housing affordable to people with an exquisite interior and exterior designed.

The 2019 gubernatorial governorship candidate of the Young Democratic Party, (YDP) further explained that he will adopt cut and filled measures to incorporate the poor by allowing the rich to pay higher, he said by bringing in people who have the capacity to pay the cost of maintenance will help the estate to stand the test of time.

Speaking of the unique features of the estate, the estate guru said that the 50 houses of 3 bedroom bungalow, is cost friendly with a well structured apartment and flexible payment system. He noted that the estate can boast of infrastructural facilities such as, reticulated water system, reliable electricity supply, internal road network, secured environment, space for car park and one of the best flower garden in the country.
According to him “This estate is going to be more prime than Shelter Afrique. The estate is gated. We have decided not to sell all the units of houses in this estate. We want to start rentals, where payment would be on monthly basis. We want to start the culture of monthly payment, not Per-annum, “We want to recreate and empower the middle class. We need to change people’s mentality about social housing. This estate is going to be fitted with a state of the arts landscaping. we are going to have 1 and 2bedroom flats in the second phase”.

While underscoring the importance of the estate, he revealed that, they will saled the unit by rooms and managed it for the owners, on the cost of the apartments, Nya-Etok disclosed that, no house at the estate is value less than 20 millions but for the love he have for humanity, he sales it between 6 to 8 million naira to help address the issue of housing deficit in the country.

The international housing consultant, said, having been in the housing sector for over three decades, want to make people landlords by giving them, comfortable apartment where the standards is obtainable any way in the country.

On his part Mr. Mitchell hinted that arrangement have been concluded for his company based in Poland to furnished the estate

Previous: NUJ Unevails Her Maiden Magazine.
Next: UYOCCIMA Gets New Exco……. As Simeon Umoette Bows Out With Legacy Projects