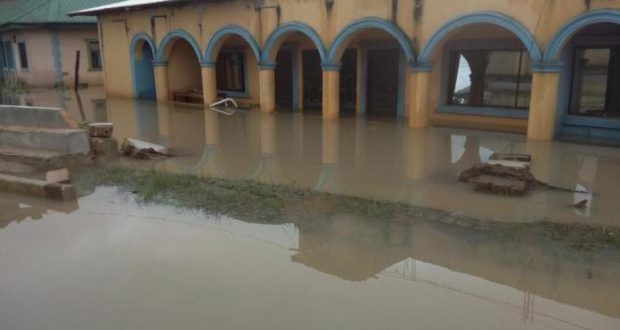 Cries. Lamentations. Anguish. Apprehensions. Discomfort. Losses. Endless tales. What a sad Sunday! This was the mood many families found themselves as perennial flood sacked them and destroyed their hard-earned property in Uyo, Akwa Ibom State capital.

For the family of Iniobong E. Ukpe, a bishop and founder of Christian Hope Assembly, Uyo, life cannot be the same for a long time to come as the ‘angry’ flood submerged his house on Sunday, July 7, with merciless damage of his household effects.

Consequently, the family of nine lost all their household property to the rampaging flood that swept through the ground floor of their uncompleted storey building at 10 Mount Zion Street off Udo Ekpo Mkpo Street, Uyo.

The rains that drizzled gradually from 11 p.m on Saturday night went torrential spewing venom on its victims. From 1 a.m. Ukpe’s family was alerted on Sunday, thinking that the unfriendly visitor might not wreak grave havoc. He woke everybody in his household and nervously watched outside to know their fate in the hands of flood that has become a regular phenomenon in the state capital as in other urban centres without development challenges. How wrong he was as the incoming flood drenched him in a split of seconds!

Unfortunately, his tenant living adjacent his was unaware of the ‘unwelcome visitor’ and he paid dearly for such as all his household property were destroyed.

Ditto for Mrs Esther Usih who lives at 12 Mount Zion Street, Uyo was equally displaced by the ‘unwanted visitor.’ The flood vehemently pulled down her fence and made gallant entry into the compound, seeping through the windows to sack her from the bedroom.

By 4 a.m. on Sunday, Ukpe heard a thunderous sound and he peeped to discover to his chagrin that the ferocious flood had pulled down his fence and ceaselessly paced into his compound. The compound automatically turned to a mini ‘river.’

For fear being drowned and run aground, he together with his wife and seven children frightfully swam out of the water-logged compound. As the day did not break, they could not undergird any property but had to move out from the deluge to perch on the tarred road, watching as the flood took over his compound including his bedroom in a manner reminiscent of military precision. By 5 p.m, the rains had receded, yet the compound was a no-go-area.

“I have lived in this compound for the past 10 years and I have not seen this unfortunate incident. All my household were covered by the flood. The windows are flooded. The flood has filled and covered up to half of the windows before invading the living rooms. All property are gone. My academic certificates and clothing have been damaged.

He attributed the disaster to unprofessional work of an unnamed construction company that diverted water to the street, narrating “It has not been so bad even when this road was not constructed.”

“In fact, my property worth more than N15 million have been destroyed. I want to plead with Akwa Ibom State government through Akwa Ibom State Emergency Management Committee (SEMA) to come to our rescue by providing a succour to alleviate our sufferings and losses,” he begged.

For Mrs Usih, a widow, it was an unpleasant sight as she packed out her few clothings and stood outside looking aghast as her compound turned to an emergency pond. “All my household property are damaged by flood. My dresses, electronic appliances and other items have been destroyed by the flood. Even my fence has been pulled down. I cannot walked into my compound.

“I could not attend church service because of this calamity that has befallen me, my family and my tenants. I have lost property estimated at N5 million. Since morning I have been calling the State Fire Service to send a truck to pump the water so that we could move in, but the officials told me that their truck has broken down. I am helpless.”

“To alleviate my plights, I want to call on State Emergency Management Committee headed by the state deputy governor, Mr. Moses Ekpo to send relief materials to us and visit us with a view to putting an end to this unfortunate incident,” she pleaded.

Writing in his Facebook timeline under the headline: Iniabasi Ekanem And His Unwanted Sunday Visitor! Patrick Albert stated “As he and his family offered their prayers before going to bed on Saturday night, July 6, 2019, Mr. Iniabasi Ekanem, a native of Onna local government area, did not know that Sunday dawn will come with a devastating news.

“With no heartbreaking thunder that accompanies most rain fall, Ekanem did not know that the early morning drizzling on Sunday, July 7, 2019, which started at about 5 a.m could render him totally traumatized, with several property and valuables gone! No thanks to the devil-like flood which accompanied the rain fall barely 45 minutes after it started.”

Albert who is Akwa Ibom Chairman of Nigerian Union of Journalists (NUJ) said “Ekanem lives on Road one, D26 by the side of the house of Mr. Charles Udoh, a Commissioner-designate and a former Commissioner for Information and Strategy in the Mobil Housing Estate near Shelter Afrique, Uyo, the capital city of Akwa Ibom State.

“In the scourge, the flood, typical like the operations of the commando, took over Ekanem’s compound, parlors, kitchen, and in the process destroying household items and documents in his private office.  His cars were equally affected.

“The victim and his family are now planning to relocate to a hotel to enable them reorganize themselves, evaluate loses and possibly come out of the trauma.”

“The State Disaster Management Agency surely needs to come to the rescue of the Ekanem’s family while the relevant authorities need to address the flood situation in the Mobil Housing Estate,” he solicited.

Daniel who is a Facebook narrated “Calamity has just befallen me ooooo. I was awakened by the rainstorm in the early hours of today (Sunday), to my amazement, my entire house had been flooded with rain, “water has taken over my house, destroyed everything, my kitchen, bedroom…everywhere. I am broken.”

These are a few cases of many flood-inflicted victims and in flood-ravaged places in the fastest growing city of Nigeria. From Osongama, Shelter Afrique, Akpasak Efa Estate, Mbiabong, Ifa, Nkemba Street, Abak Road to Atan Offot village, among others, the story remains the same: gnashing of teeth, havoc and agony caused by the natural disaster.

Ephraim Edem, an architect with the Department of Architecture, University of Uyo, said “I think the state government should take a holistic view on solving flood problem in the capital. It has to look at what has been and what ought to be done to bring solution to the perennial problem that has bedeviled the town and caused a lot of havoc to many families.  I think subsequent development programmes in terms of road construction should be based on surveyor’s topography map.

“Instead of state government doing that, it will award contract to a company that will embark on indiscriminate provision of drains in the city without any reference point. The reference point should be based on the topo map designed and approved by Office of the state Surveyor-General. When the contractors dig drains, such will be in accordance with the topo map.

“There is absolute need for the road contractors to know the collection and discharging points before they provide drains. Instead of doing that, government will award road and allow contractors to provide the drains without reference to any particular document. Where is the lowest point and where is the highest point?”

Edem, who is an associate professor in the department noted, “For instance, there is a pond of water behind Methodist Church Nigeria, Etoi along Oron Road. Ten years ago, there was no pond of water there. It came up because construction of the road was awarded and the contractor was not given topo map of the area that would have guided him to know how to control water.

“When the area started flooding, the state government hurriedly awarded contract for the construction of underground drainage system to remove water through water-logged Akwa Efak to Ikot Iko in Ibesikpo Asutan. It is not about provision of drains which some of them dead-ended. It starts here and ends there. If rains fall, the area is flooded.”

An anonymous civil engineer in Uyo blamed the flood on the topography of Uyo. According to him, “The terrain of Uyo metropolis is flat. The fact is that Uyo Capital City Development Authority (UCCDA) master plan is abused by some people as buildings are erected along natural waterways. Once artificial ones are not constructed and rains fall, there is bound to be flooding.”

“Secondly, some contracting firms handling road construction in the state do not cognitive experience. They do not take into consideration some construction factors such as the number of vehicles that will ply the road, the vehicular weight, the population and the run-off. Once the quantity of water overwhelms the construction factor, there is bound to be an erosion.

“Thirdly, they do not consider the fact that it is a disaster area and as such there is need to adequate provision for drainage system in the city. Once contract is awarded, the contractor rolls in equipment not caring to know the provision of drains and culverts on the road,” he mentioned.

To him, “There ought to be feasibility studies- environmental impact assessment. Only the trained and knowledgeable person on the job could effectively handle it. Unfortunately, the state Ministry of Works allows young but inexperienced graduates to supervise some key road project that should be handled by consultants and experienced engineers. You will see how the ministry’s engineers are directed to supervise construction of the roads.

He blamed poor provision of infrastructural facilities in the state to sidelining of experienced hands. To the civil engineer, “Without bringing in consultants, they will be learning from the contracting engineers at the end of the day. There is no construction engineer that will allow them to know the secrets of the job since their sole intention is to make profit in the long run.

“The government may have good intention to build good roads, but since the roads are not supervised by consultants the job may be compromised. How many experienced civil engineers are there in the ministry to be the designer, supervisor and consultant? Why is the government scared of consultants?

“It is wrong for government to write on the signpost: Client: Akwa Ibom State Government, Consultant: Ministry of Works. It is not done anywhere. Even the Federal Government does not do it except this government. The consultant will conceptualise the project and will then advise the client on what is supposed to be done for durability of the project. The current government infrastructural provision is a sham because the projects provided now may not last,” he lashed the government.

However, the Nigeria Meteorological Agency (NiMet), the country’s meteorological department has predicted as follows the international standard of four climatological seasons with some local adjustments: winter.