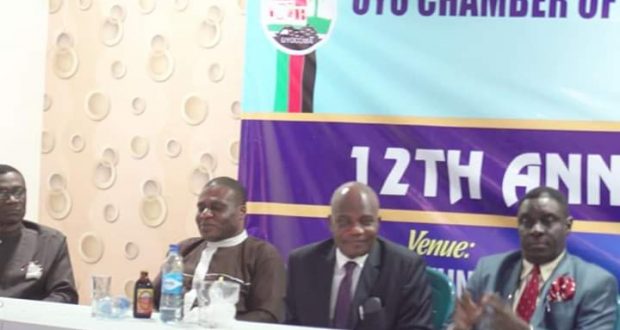 UYOCCIMA Gets New Exco……. As Simeon Umoette Bows Out With Legacy Projects

The just concluded 12th Annual General Meeting of Uyo Chamber of Commerce, Industry, Mines and Agriculture (UYOCCIMA) held recently at Good Fortune Hotel, Uyo had the emergence of the former Rector of Maritime Academy, Obong Nseyen Ebong as the new President of the organization.

In his acceptance speech, the new President, Obong Nseyen Ebong promised that his exco will work diligently and shall also imbibe the spirit of transparency, accountability, commitment and sincerity to justify the confidence reposed on the star-studded team to move UYOCCIMA forward. Obong Ebong added that UYOCIMA exco under his watch will bring in their wealth of experience over the years in the public and private sector to steer economic development of the state.

Earlier, in his opening remarks, the Chairman of the occasion, Engr. Essien Ekidem thanked Governor Udom Emmanuel for his Industrialisation drive and prayed for God’s leadership, calling on the chamber to join hands with the State Government in moving Akwa Ibom forward with words and actions for a better future.

Also Speaking, the Commissioner, Ministry of Commerce, Trade and investment, Prince Ukpong Akpabio represented at the occasion by the Permanent Secretary at the Ministry, Mr. Oliver Udokpo said that UYOCCIMA remains a relevant stake holder in the Industrialisation drive of the present administration as such their advise is very critical to the development of the state as the Ministry will be glad to receive the new executive soon.

In his handing over note, the outgoing President of the Chamber, Obong Simeon Umoette said he is handing over to the new exco for ratification of a new improve chamber, the structure which promises to be more efficient.

According to him, “We present for your ratification a new improved Chamber, the structure of which promises to be more efficient, effective and competitive.

“Henceforth, things will not be the same, I’m happy to handover an allocated Commisurate 5.391 hectres of land located at ring road, in Ikot Adaidem, Ibiono Ibom Local Government Area.

“I commend the efforts of my predecessor, Obong Okon Emmah who acted as a facilitator, as we are stepping out – I pray that my administration will be remembered for at least two achievement, Land Aquisition and reorganization. I expect my successor to build on the new strong organization and expand membership base to accommodate the Women and Youths.”

He called for a committee to incorporate hospitality, transportation sector, oil and gas industry among other committees in the organization.

Previous: We Are Set for An Exquisite Estates in A’Ibom ~ Arc Nya-Etok
Next: Coronavirus Officially Declared A Pandemic By The World Health Organisation