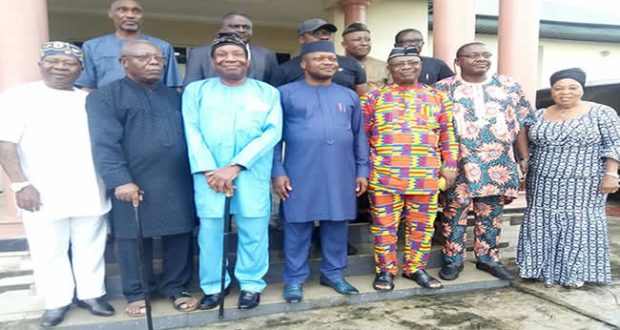 The Executive Chairman of Uyo Local Government Council, Elder Imoh Asuquo Okon, has Friday, June 21, 2019 played host to erstwhile chairpersons of the council in his office at the Council Secretariat, Uyo.
Imoh Okon who spoke to newsmen shortly after the ex-Uyo council chairmen’s august visit and inspection exercise said that “Well, you know at the federal level, there is always Council of State, where the President meets with former presidents of the Federal Republic of Nigeria; and at the local government level, it is incumbent on me as the serving Executive Chairman to invite my predecessors.
“Beginning from those who have served a very long time ago up to the very recent ones, this union is across party lines. We have no business with partisanship when we are discussing Uyo. This is Uyo matter.
“We came and exchanged ideas, and we also discussed on the nitty-gritty of good governance, and also the development of Uyo people. I want to appreciate all of them. Two people gave apologies: one on ill-health grounds, and the other on being out of the state. Outside that, it was full house.”
Going down memory lane, he recalled that Obong Aniefiok Uwah came in as the Sole Administrator of Uyo; Uyo then was made up of current four local government areas; then came Hon. (Mrs.) Stella Effiom, and then Chief Clement Ekott.
The executive chairman further related that he was a beneficiary of a scholarship award to read Medical Lab Science at the University of Calabar through the recommendation of Chief Ekott when he (Chief Ekott) was serving as a supervisor in the Uyo Local Government Council at the time, which, according to him, has remained indelible in his heart.
The Uyo Council Chairman enumerated the legacies left behind by the former council chairmen to include the students’ bursary scheme that is still being sustained by his administration, development of motor park and other sectors of economy of Uyo.
Elder Imoh Okon disclosed that the meeting with his predecessors, which became very essential at this time in the life of his administration, was meant to achieve a collection and sharing of experiences, adding that all went well in their discussions which culminated in the inspection exercise at the council secretariat on various kinds of medical and hospital equipment procured by the Uyo LGC.
He therefore took time to loudly applaud the State Governor, Mr. Udom Gabriel Emmanuel, over the dividends of democracy which he acknowledged have been made to be felt by the people of Uyo Local Government Area, while urging the state government to do more by letting the citizenry have a feel of being the “landlords” of the state capital.
The highpoint of the grand gathering was the inspection tour of medical and hospital equipment procured and stored at the council secretariat, and the following ex-council helmsmen were present: Chief Clement Ekott, Chief Morris Edet, Hon. Ekerete Ekpenyong, Arc. Essien Nkanga, Barr. Mfon Ben, Obong Aniefiok Uwah, Hon. (Mrs.) Stella Effiom, Hon. Chris Nyong, Hon. Chris Udofia, among others.