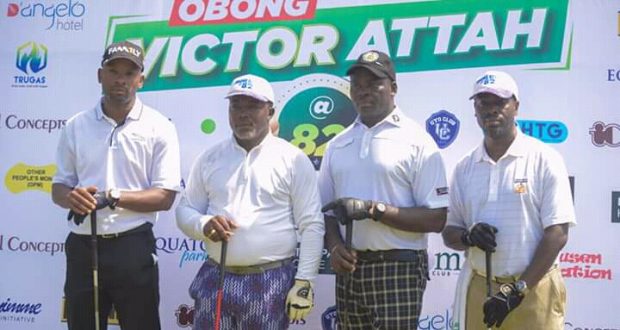 The serenity of Ibom Hotels & Golf Resort, Uyo came alive Saturday November 20, 2020 with beehive of celebration as golfers under the aegis of Uyo golf club and others in the country came out in their numbers to celebrate former Governor of Akwa Ibom State, Arc. Victor Attah on his 82nd birthday, lauding him for serving the state with zeal and commitment.

Barr. Usenobong Akpabio Chairman of the golf club in his address at Le meridien and golf Resort, venue of the celebration, described the celebrant as a true democrat, who legacies is still fresh in the minds of people.

The chairman commended the former Governor for his patriotism and dedication to the unity, peace and development of Nigeria as well as offering counsel on various national issues.

Mr Akpabio urged him to remain focused in his service which has brought honour and goodwill to the state, while wishing him many more years of good health, peace and happiness. He said Akwa Ibom needs a leader in this mould of Obong Attah, mature, seasoned, cerebral, widely exposed with vision to move the state from a dependence on oil into a society driven by technology.

Akpabio noted that Obong Attah promoted ethnic harmony in Akwa Ibom state, which had emerged as an oasis of peace in Niger-Delta region, because of his humble and large hearted affinity with people, endeared so many to him with a cerebral name, ” The father of modern Akwa Ibom state “.

On his part, member representing Nsit Ubium in the 7th Assembly, Barr. Otobobg Bob commended Obong Attah for his braveness to have pursued the monthly derivation funds, and his courageous strength in the fight against the Onshore offshore Oil dichotomy for the benefit of Akwa Ibom State and the entire South South region.

Also speaking, Mr. Emmanuel Ekong, Chairman equatorial parks and premises Ltd, commended the octogenarian for the sacrifices he made fighting for equitable distribution of revenue accrued from natural resources in the region that he championed, which today has afforded states in the Niger Delta region with more earnings to direct towards the development of their area, while assuring that his company is working round the clock to maintained the quality Ibom golf course is known for.

A member of the club, Marry-Ann Udoka revealed that Gov Attah’s leadership strides was formulated to meet the future demands of Akwa Ibom State, making reference to the golf course which she said is the best in the country and a golf hub for golfers.

In his response, Obong Attah appreciated golfers for identifying with him on his nativity,
Said, he put Akwa Ibom above all political sentiment during his tenure as a governor. Speaking through his representative Mr. Anietie Ekong. Obong Attah called on leaders in the state to do their best at all levels of leadership in keeping Akwa Ibom at the global scale of development.

The Ibesikpo Asutan born politician was birthed on November 20, 1938 and became the governor from May,1999 to 29th May 2007. Highpoint of the celebration was presentation of awards to some outstanding golfers.