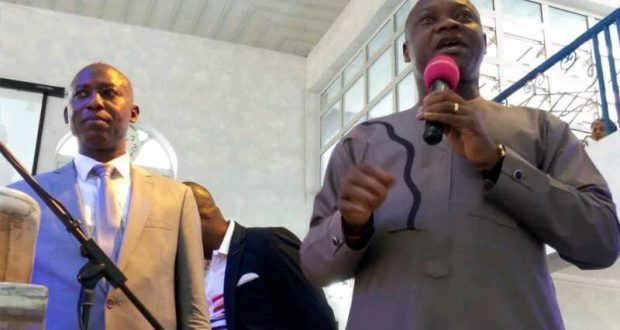 The Executive Chairman of Uyo Local Government  Area Elder (Hon.) Imoh Okon has called on churches who have been owed by the past administrations of Uyo LGA to come and report all unredeemed pledges made by them either through invitation or special thanksgiving for redemption. Elder Okon made this known yesterday at the Apostolic Church Akpakpan Assembly where the Internal Auditor of Uyo Local government Council, Elder Nyakno Etuk dedicated his second child after 18years of his first offspring.
Imoh Okon who attended the service with his wife, Deaconess Idaraesit Imoh Okon said that his regime is to resolve to redeemed all pledges made by the past Chairmen on behalf of the council followed  by his discovery of countless number of pledges filed in the council registery, noting that making promises in the church using council’s name without redeeming them can bring curses upon the council and Uyo Local Government in general.
He also expressed bitterness over what he described as Fake Promises by some politicians with the aim of gaining popularity, warning that there is a spiritual consequence of deceiving the church in the name of making empty pledges. The Chairman who said that he has mandated the compilation of all pledges filed in the council’s record to be reiterated as it is better not to pledge than pledge without redeeming.
He strongly assured that all pledges made to churches on behalf of the council in the past will be cleared by his administration before the end of 2018. Adding also that his administration will not indulge in such ungodly attitude in order not to incure curses upon the council and Uyo people.
“While I was serving as Transition Secretary, I discovered that there have been countless number of pledges made by previous Chairmen of Council to churches yet they were not redeemed. That is why I promised, during my campaign, that if elected as Chairman, I will make sure these pledges are redeemed. As I am talking now, just as I promised, I had since mandated that the list of all the pledges and churches concern be raised. Therefore, I am also announcing to the leadership of this church to check their records, if they find any record of pledge made on behalf of Uyo Local Government Council that has not been redeemed, they should come to council, so that it can be redeemed. Not only in this church, but all the churches within and
outside Uyo. I am coming to stop politicians, especially in Uyo, from going about churches to make pledges and run away,” Elder Imoh Okon said. While congratulating the celebrant on the dedication of their new born baby, the Council boss also an
Elder in  Qua Iboe Church ,thanked God for visiting the family after 18 years of childlessness and also prayed God to continue to shower his blessings on them.
2018-01-08
dozzier