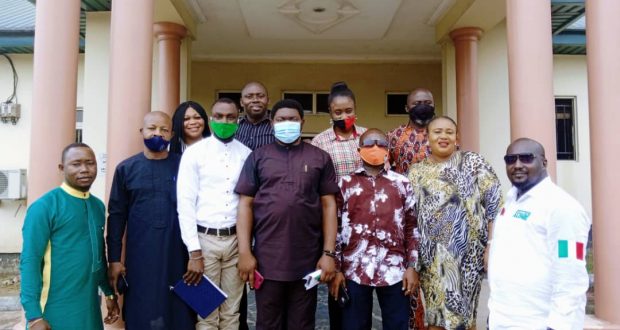 The Executive Chairman of Uyo Local Government, Dr. Uwemedimo Udo has saluted the cordial and collaborative relationship with the legislative arm of the council since he assumed office.

Dr. Udo disclosed this on Wednesday, March 10, 2021 when he, accompanied by the Secretary of Council, Mr. Ubong Udofia played host to representatives of the legislative arm led by the Leader of the Legislature, Hon. Ubong Effiong in his office.

The Councillors during the solidarity visit to the Chairman made cash donation as part of their support towards the completion of the ongoing projects at the council secretariat.

The Executive Chairman in his remarks, described the gesture by the Councillors as phenomenal, thanking them for their contribution to the continuity of good governance.

“This is the first time Councillors have demostrated solidarity to say, this is our token of love for continuity of good governance because this is a practical form of good governance that we are offering. The only time that this form of gesture was demonstrated was when Supervisors, during the administration of Prince Ekerette Ekpenyong, offered their one month salary as contribution for the construction of Uyo Traditional Rulers Council. You have showed that you share in the vision of this administration and this means that the legislature and the executive arms are on the same page.”

Speaking further, Dr. Udo said the action of the Councillors is a clear demonstration of confidence in his administration and expressed appreciation for their goodwill and solidarity.

The Uyo helmsman also emphasized the importance of teamwork and synergy in achieving corporate objectives, declaring that synergy held key to ultimate performance in governance.

Earlier in his remarks, the Leader of the 7th Uyo Legislative Council, Hon. Ubong Effiong said the gesture was to reaffirm the support of the Councillors to the Chairman following his outstanding performance in the discharge of his duties.