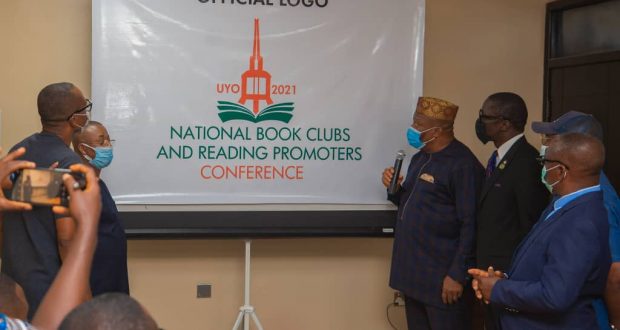 Arrengement has been concluded for the first ever National book conference in Uyo the Akwa Ibom State capital, organized by Uyo book club.

Addressing, the press and members of the Local Organizing Committee, during the unveling of the logo, the founder of the club, Dr Udeme Nana, said the logo will be featured in all writing material of the club. Nana noted that the aim is to establish a network of book clubs across the state with the ambition of steadily building up a crop of readers, leaders and putting books in the hands of citizens, especially young people, who have lost touch with the immeasurable joys of reading for leisure.

Nana a communication scholar, expressed confidence that the maiden edition will herald a rebirth of interest in reading among young people in Akwa Ibom and state.

He said, ”this is the first ever book reading conference that will be held in Nigeria, or anywhere in West Africa,m. It is significant because it’s coming to Uyo and it’s not in Ife or Ibadan. It is not in any locality in Nigeria.

It is important that Akwa Ibom people embrace this vision, because when our people are exposed to books, the sensibility of our people will become refined and when the sensibility of people are refined, they help to make for development and sustainable growth of human societies that’s why this book launch have become very important.” he explained.

Unveiling the official logo for the event tagged, National Book Clubs and Reading Promoters Conference, ‘Uyo 2021’, at Williams Shakespeare hall, Watbridge Hotel and Suites on Tuesday, the Patron of the Club, Barr. Ekong Sampson who doubles as Chairman Local Organizing Committee noted that arrangements are in top gear to host participants from all over the country for the event.

He noted that the club will use book to drive advocacy, bring books closer to the people as other pursuits tend to have taken the book out of the equation in our lives. He called on all members to make efforts to return the book to its former pride of place and make it our favourite pastime again the way it was while we were growing up.

The conference will hold in Uyo from Thursday 16th – Saturday 18th September, 2021.