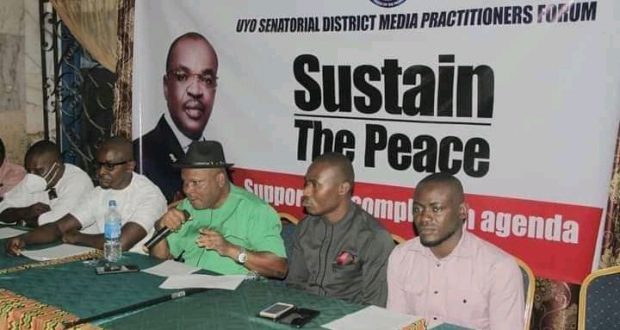 A group of media professionals in Akwa Ibom State, known as The Uyo Senatorial District Media Practitioners Forum, USDMPF, has showered encomium on Governor Udom Emmanuel on his achievements since he came onboard as the governor, describing him as a visionary leader of tested ability, sound judgement, and savvy administrator hence his performance.

Addressing the press, on Thursday August 5, in Uyo the Akwa Ibom State capital, The Chairman of the Group Deacon Ofonimeh Isong noted that an assessment of governor Emmanuel’s performance  through his corporate governance structure had created a lots of jobs courtesy of his huge investments in industrialisation, agriculture, education, health, aviation, sports among others.

Deacon Isong noted that the state has witnessed tremendous industrialization, within the last six years of his administration thereby putting Akwa Ibom State in the global scale of quality leadership.

Congratulating Akwa United on their well deserved victory in the 2020/2021 Nigerian Professional Football League for the first time, Isong explained that their victory is in line with the huge investment in Area of youth and sports development done by the Governor.

He said USDMPF is a duly registered independent media group, made of core media guru poised and determined to interface with all stakeholders with a view to identified, promote and rally support for the best candidate from the district to succeed governor Udom Emmanuel come 2023.

“In pursuit of this objective, the USDMPF wishes to make it clear that,the forum is not aligned to any governorship aspirant, not until that objective of identifying the most suitable candidate is met.

However, the Forum wishes to note that to set the ball rolling,we had stated our mantra as SUSTAIN THE PEACE, SUPPORT THE COMPLETION AGENDA, we had gone ahead to start a massive media campaign and hoist our bill boards. We hereby declare our unalloyed support for MPM and its leadership led by Barr. Emmanuel Enoidem.”

According to the Chairman,he said the group has reaffirmed its stand against supporting individuals who are members of occult or cult groups to contest in the 2023 governorship election of Akwa Ibom state or any other position in the state.

While calling on all contenders in the 2023 election to call their supporters to order and warn them to desist from attacking and abusing the Governor,who is the father of Akwa Ibom State, as no one spits on a stool and expects to sit on it.

The group unanimously bemoaned  the adverse effect of cultism in the state,  noting  that the Christian community would not agree to the position being  given to a cultist and that they would  oppose vehemently anyone found in the dreaded group.

They call on Akwa Ibom people to take advantage of the ongoing voter’s registration exercise by the independent National Electoral Commission (INEC), and registered to be eligible to participate in electing leader’s that will maintain and sustain peace as well as attract development to the State beyond 2023.