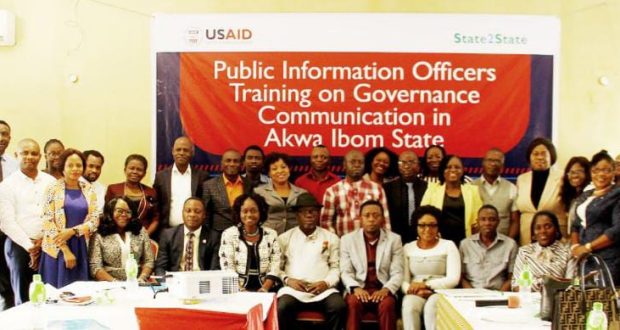 With Citizens participation as a critical factor in governance, the United State Agency for International Development, USAID, has applauded the Akwa Ibom State Government for its strategic Feedback mechanism towards ensuring effective inclusion of the governed in governance.

The commendation was made in Uyo, during a 3-day Training on Governance Communication for Public Information Officers organised by USAID in collaboration with the Ministry of Information and Strategy held at the Luton Park Hotels and Suites from Wednesday 20th to Friday 22nd April, 2022.

USAID particularly applauded the State Government for running a 24hour Hotline 07000000001to enable Citizens send-in their inputs, contributions, complaints and feedback to government all sectors and areas of need and concern, acknowledging that, Akwa Ibom was the only state of the Seven under its jurisdiction in Nigeria that has such an efficient Citizens Feedback mechanism.

“I must confess that this is the first time I have experienced this in Nigeria,”  the USAID Facilitator, Obinna Chukwuezie emphasized after making a call to the Hotline to confirm its existence and operation in the State, during one of the practical sessions on “The Concept of Governance Communication and Effective Communication Strategies.”

The Communication and Knowledge Management Specialist who was also drilling participants on Feedback mechanism in communication and the critical role in governance, scored Akwa Ibom high in operating the 24hour hotline as feedback tool.

Also on the scoreboard of USAID was the massive trainings and re-training of the state workforce within and outside the country to keep them abreast of the changing Communication technologies of the 21st century and the training of staff on the Sign and Chinese language geared at enhancing social inclusion in governance.

All these USAID high scoring Governance Communication tools are part of the innovations of Comrade Ini Ememobong which came into the limelight, when he assumed office as the Honorable Commissioner for Information & Strategy in the State.

USAID therefore congratulated Comrade Ini Ememobong for the massive improvement in the Information sector of the state which has gone a long way in enhancing social inclusion and Citizens participation in governance.

Among the Resource Persons at the training included: The USAID Team Lead,  Porvo Paago Imavel who took participants through an update on Governance Reforms in Priority Sectors of Akwa Ibom State with a view to entrenching transparency,  accountability and effectiveness in government.

The Team Leader informed that Akwa Ibom  is the only State in Nigeria on the National Chart of Account and congratulated Governor Udom Emmanuel in ensuring international best practices in the government Accounting system.

On her part, the USAID Gender and Social Inclusion Specialist,  Bar Emaediong Akpan, took the participants on Inclusive communication which involves the dissemination of government policies and programmes to reach all audiences to ensure gender and social inclusion, being sensitive to the people with disabilities in government planning and development processes.

Participants who were given an indepth analysis of the implications of the Freedom of Information (FOI) Law during the training,  were also exposed to group work and presentation on the USAID critical sectors as applicable to Akwa Ibom State.

Highlight of the programme which was declared open by the Honourable Commissioner for Information and Strategy, Comrade Ini Ememobong, represented at the occasion by the Permanent Secretary, Akparawa James Edet was the presentation of a 10-point Communique on behalf of the Communique drafting committee by the Chairman and Director of Public Relations in the Ministry, Mrs Grace Akpan

Another feature of the event, was the pesentation of certificate of completion to the participants by the Honourable Commissioner for Information and Strategy, Comrade Ini Ememobong, represented by the Permanent Secretary, Akparawa James Edet.