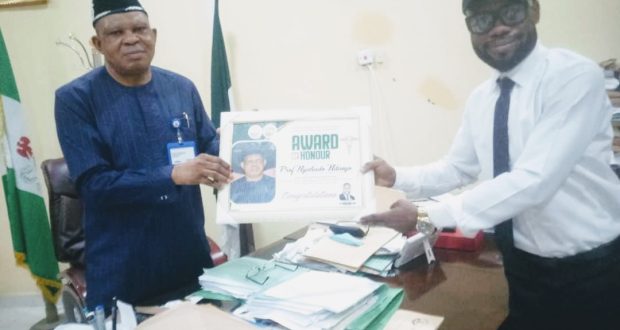 … described as father of modern uniuyo by NAAKIMS President

The President of Akwa Ibom Medical Students Worldwide, Comr. Utomobong Udo has described The Vice Chancellor of The University of Uyo, Prof Nyaudo Ndaeyo as a father of Modern Uniuyo and a Lover of Medical Education.

The President gave the commendation on the recently when the leadership of The Associations of Akwa Ibom Medical Student Worldwide paid him a solidarity visit as part of the activities to round off the association’s 20 year Anniversary Celebration/ health and academic summit held in Uyo, Akwa Ibom State on the 12th and 13th of November, 2021 and also to felicitate with the Vice Chancellor on his one year anniversary in office.

The president acknowledged with thanks the unrelenting efforts of The Vice Chancellor in repositioning the institution evidenced by the completion of Laudable projects, accreditation of new departments by the Nigerian Universities Commission (NUC), improving security architecture , restructuring of old structures to gain modern outlook.

The Medical Student Leader, particularly appreciated The Vice Chancellor for securing accreditation for Medicine and Surgery programme as well as securing an increase in its admission quota for which according to the president will offer opportunity for more Akwa Ibomites to gain admission to study medicine, hence guarantee an increase in the output of doctors trained to boost healthcare services in the State.

He described The approval for the new degree awarding programmes in the department of Dentistry as well as other Allied Healthe Sciences like Medical Lab Science, Nursing Science,Physiotherapy and Radiography as laudable. He commended the effort of The Vice Chancellor for achieving such feat which he described as uncommon within one year in office. Utomobong highlighted the activities that marked the association at 20 which also had a launching of The maiden edition of the Association’s magazine, and later conferred on the Vice Chancellor an Award of Honour as the “Pillar of Medical Education.”

Receiving the honour, The Vice Chancellor described the honour done him as a gesture he values so much, noting that he is committed to repositioning the University, adding that the award will encouraged him to do more. He specially commended the leadership of Naakims Worldwide for demonstrating Capacity in leading the medical Students. He also Congratulated the association on her 20 year anniversary and for successfully launching the maiden edition of the association’s magazine. Present to witness The presentation where The Director of administration, Mr Linus Okoko, the Student Union Government President who is also a medical student and the aids of the NAAKIMS WW President among others.