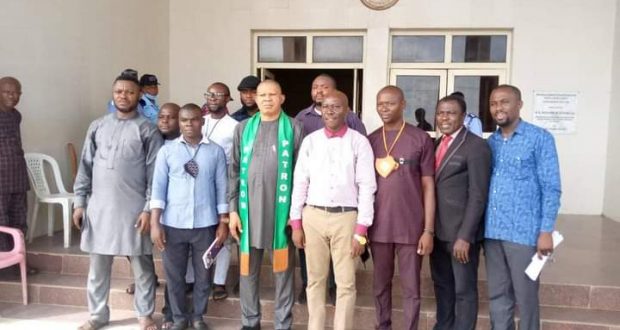 The newly elected Vice Chancellor of the University of Uyo, Professor Nyaudo Ndaeyo, who is currently the Vice Chancellor Administration, has promised that his administration will ensure harmonious relationship with the media community which will helped signpost the university as the best in the country.

Professor Ndaeyo gave the assurance today during a courtesy visit on him by members of IKONO/INI Media Professionals Forum (IKIMAP).

The 8th substantive Vice Chancellor told the visiting team that he will do his best to leave behind indelible imprint that would be difficult to erased after his tenure, while calling on the media to be ambassadors of change in the society. He assured the group of the university’s support to project program and activities that would promote the development of the institution.

He maintained that, without the media, the university will be cut off from happening in the society, said he looks forward to a more professional bond that will evolved between the university and IKIMAP.

Earlier in his address, the President of the group, Mr. Emmanuel Effiong, congratulated the Ini born academic for his astute leadership prowess which has earned him the new office, commanded the Chief Security Office of the university, Mr. Asuquo Inyang, Rtd for his dexterity in managing the security apparatus of the university.

Effiong described the new VC as a rare gem and a blessing to the new generation. Said the group is made up of different Media Houses on Prints and Electronics, including Independent Television Programme Producers that will develop contents, analyze university events and reports extensively to the understanding of the global village, thereby retaining the memories.

He used the occasion to solicit for his support, hear him, “As the watchdog of the society, in the light of this achievement, we thought it expedient to seek partnership with you and the university community, especially in the provision of adequate publicity of all the lofty ideals of your administration”.

“My VC, it will interest you to know that Nkwot and Ukwok remain the proverbial birds that lay the golden eggs for Akwa Ibom State and Nigeria at large but yet suffered age-long neglect in terms of the federal and state government projects presence in the area. We have so far published many articles, Tv documentaries to showcase these challenges coupled with series of letters to both local government council chairmen, state government, NDDC, and the federal government but all to no avail, I wish to also stand here, in this great citadel of learning, which is the fountain of knowledge for solutions to every challenge as this Forum calls on them for solutions to our road problem”.

He noted that, the organization will used the platform to contribute to the unity projects, and development of Ikono/Ini Federal Constituency through high-powered campaign/advocacy on the progress and challenges of the people.

Highpoint of the visit was the decoration of the new VC as the patron of the association and presentation of portrait to him as a mark of honour.

Previous: DON’T KILL YOURSELF FOR ANY POLITICIAN – UDOEDEHE
Next: COLLEGE OF EDUCATION HOLDS 2019/2020 MATRICULATION WEDNESDAY NOV 11