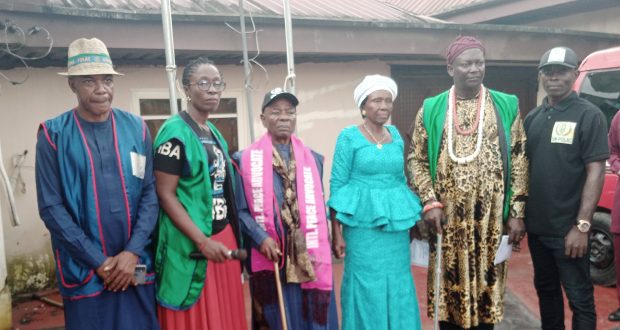 An international nonprofit organisation which promotes an innovative, values-based approach to peace building, has conferred on Chief Ime Essien who is an Elder Statesman in Itu local government with undented track record of community service with “AMBASSADOR FOR PEACE” in recognition of his contributions to national peace, societal stability, and human capital development and empowerment.

Decorating elder Essien with the paraphernalia of the global body, Director General, UN-POLAC Foundation, Prof Halo Eton noted that leadership of the group agreed to conferred on his with “Ambassador of peace” in furtherance of his pursuit for peace-building and promotion of peaceful co-existence amongst individuals, communities, states, an as well Nigeria.

He noted that Elder Ime Essien was carefully selected for the award by the group after well thought out research due to consultations, and considerations based on merit, owing to his several years of humanitarian and Community Support Services.

Prof Eton, further explained that POLAC mandate is to enhance the effectiveness of the UN Sustainable Development Goals (SDGs) and UNESCO culture of peace project.

“UN-POLAC also focuses on the maintenance of peace and security and the restoration of human dignity. Its objective is to promote peace and harmony in various local communities across the globe and to ensure that the aims and objectives of the United Nations in the maintenance of global peace is being achieved.”

In his response, Elder Essien, commended the UN-POLAC leadership for recognizing his efforts toward community development and service to humanity, as well as effort to maintain peace and unity. He called on communities to embrace peace wholeheartedly,as peace remain the only foundation upon which any developments can thrives.

Mr. Benjamin Etim, one of the son, expressed happiness for the honoured and thanked UN-POLAC for identifying with the family, he noted that his father is a Man of peace, who loved to see others progress in life. He attributed their success story in life to quality education given to them by the father, said it has helped to sustained the family integrity for decades.

High point of the event was the hoisting of UN-POLAC flags at chief Essien’s Compound in Ibiaku Ikot Anse.