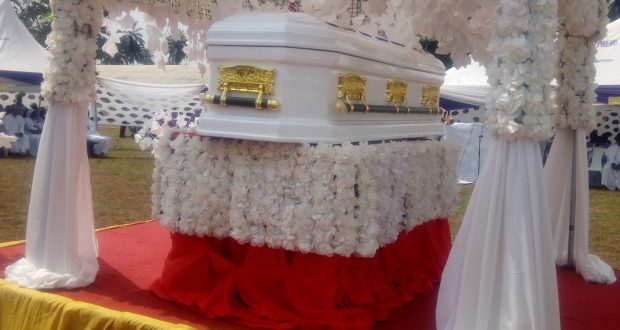 It was a beehive of activities for the people of Ukpap Itak, in Ikono local government Area last weekend as they came out in their numbers to pay their last respect to late sis. Sarah George Udousoroh .
In his sermon drawn from the book of Ecclesiastes 3:1-3, the officiating priest of the Brotherhood of the cross and start, charged Christians to always make use of their time, as the is a time to do everything on earth, said beasd on the biblical instruction the church came to mourn with the family, the clergy called on believers to laid good legacies worthy of emulation, while describing the late matriarch as a disciplinarian, trustworthy, resourceful and God fearing, and prayed for the repose of the departed soul, the clergy further state that at the end of life, books will be opened to read the account of all person be it good or bad, maintained that, dead is a messager from God, the man of God insists on leaving a just life as anything beyond that makes us nothing before God.

According to records of the deceased make available had it that, the late matriarch was born in 1920 in Ikot Akpan Odung Itak in Ikono local government Area and had her early education at vocational school where she learnt housekeeping and needle work which sustained the family till her dead. According to friends and associates of late madam Sarah also showed that mama contributed so much to the development of Itak community when she was alive.

Being an outstanding craftswoman, she used her profession to teach wemen how to keep the home by being independent and adding value to their families, consequently after graduation from vocational training school, her father late Chief Henry Udo Akpan Ekoi had to slaughter cows in appreciation and to present her to suitors who may need her hand in marriage.
While mourning with the family, the PDP chapter chairman of Ikono, Obong Barr Moses Akpan Who led other party faithful to the burial ceremony said that it is a good thing for a child to leave and bury the parents, adding that Eng. Udousoroh have fulfilled that moral obligation, and described the late mother as a woman with the heart of gold, he charged the family to be consoled by the indelible imprint their late mother left behind, while praying for corporation, love and peace among the children. Others who grace the occasion was chairman Ikono local government, Hon Itoro Columba, member Ikono State House of Assembly, Hon Asuquo Nana, Barr. Goddy Umoh, state legal adviser of the party, Itak community etc.
Appreciating God for the successful event, the deceased son Eng Edem George expressed his profound gratitude to all those who supported family and equally attended the funeral, wish them a successful yuletide season and a prosperous new year.