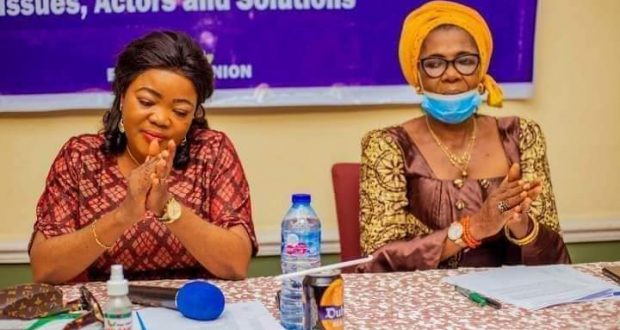 … as AIPAC holds a maiden public hearing on insecurity in Uyo

Dr. Ido who is the State Chairman of AIPAC stated that the State Government has done well in the area of security hence the investors friendly environment.

She said “It is worthy of note that the present State Government has displayed enormous capacity in handling security in Akwa Ibom State which has culminated into peace and tranquillity in the state.”

The AIPAC Chairman also called on Akwa Ibomites to give the State Government the necessary support to sustain peace, added that there is a serious vacuum in communities that there’s need to enhance rapid security system response by informing the stakeholders’ and dialogue on the issue of insecurity in the state, especially between the Government, security agencies and the traditional rulers.

Dr. Ido who doubles as the Chairman Public Accounts Committee in the 7th Assembly who spoke on the theme of the exercise “Insecurity in Akwa Ibom State: Issues, Actors and Solutions” said the programme was sponsored by the European Union.

She expressed delight with the impressive turn-up of invitees, especially the National Chairman of Pan- Niger Delta Forum (PANDEF, His Excellency, Otuekong Idongesit Nkanga who was represented by the former SSG, Obonganwan Grace Ekong.

The AIPAC Chairlady while presenting objectives of the event said it was to exchange views and share experiences with high – level sons and daughters of Uyo Senatorial District, stressing that the public hearing is not only to inform but also to brainstorm, support and contribute for a secure Akwa Ibom State.

The National Chairman of Pan- Niger Delta Forum (PANDEF), His Excellency Otuekong Idongesit Nkanga who was represented by Obonganwan Grace Akpan thanked the organizers of the event, especially for selecting most of the participants amongst youth saying that once insecurity is controlled in any society, It stimulates development, peace and unity in the state.

She urged all the participants to contribute and proffer solutions to tackle insecurity in Akwa Ibom.

The PANDEF National Chairman charged Akwa Ibom youths not to allow anyone to lure them into crime when their wards are schooling abroad.

She thanked the State Governor, His Excellency, Mr. Udom Gabriel Emmanuel for setting up the committee which is believed to eradicate or minimize crime in the state.

Also, speaking the Chairman State Secondary Education Board, Hon. Dr. Ekaette Ebong Okon who was one of the speakers decried the increase of rape in the State.

Dr Okon who also the President, Uyo Senatorial District Women Association complained of students being raped by their parents and even Pastors who are supposed to preach the gospel of Christ for them.

Some of the participants who gave their contributions include the SSA to the Governor on Youths Matters, Akparawa Iwad Udofia, the representative of Niger Delta Dialogue, Dr. Felix, Dr. Akpan Obong, Dr. Mrs. Nse Udoh, the secretary of PANDEF, Dr. Frank, Barr. Mrs. Umoh , the Paramount Ruler of Itu, the Divisional Police Officer of Ewet Housing, amongst others.