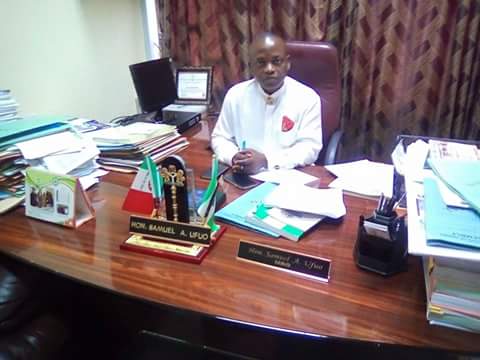 The member representing Mbo State constituency in Akwa Ibom state House of Assembly, Hon Samuel Ufuo has spoken glaringly on the Akwa Ibom Social Housing Agency Bill sponsored by Speaker, Rt Hon (Barr) Onofiok Luke, member representing Nsit Ubium state constituency in Akwa Ibom state House of Assembly. Speaking at Tuesdays’ plenary in support of bill, Ufuo who is generally referred to as ‘ Mr Intelligent’, commended the Rt Hon Luke, the lead sponsor of the bill for deeming it fit to consider the legalisation of affordable Housing scheme/facility for workers of Akwa Ibom state (both able and disabled) in line with the declaration of the Beijing- China conference of 1995. The Mbo lawmaker, chairman House committee on Education stated with concern that food, shelter and clothing remains the basic necessity of life as such every government should works towards the provision of basic amenities to its citizenry. He concluded that since the bill seeks to ameliorate the challenges of accommodation faced by most workers in the state and since it  will be beneficial to the people; the low income earners, the physically challenged as well as create employment for the people, he has to support the speedy passage of such bill to become a law. Meanwhile the bill “Akwa Ibom state Social Housing Bill” passed through second reading at Tuesday’s plenary.