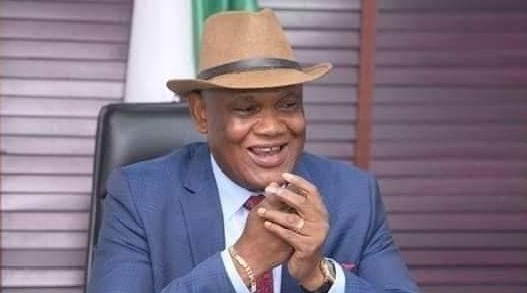 Congratulates Akparawa Ephraim Akparawa Inyangeyen, on your recent confirmation and clearance as a commissioner into the Governor Udom Emmanuel-led government in Akwa Ibom State.
Akwa Ibom State was created on the  September 23, 1987 by the then Military Administration of General Ibrahim Badamosi Babangida. The struggles for political entity for a people became a reality, and this was the ultimate triumph of justice, which was to have considerable political significance.
Quite interestingly, at every turn in people’s life, event takes place, demanding a change of rule of engagement for social-political and economic development. Hence, such turn of event is the time we are in now, with Mr. Udom Emmanuel at the helm of affairs as the Governor of Akwa Ibom State, whose strides will remain a water shed in our state’s history, and will be remembered with joy and admiration by all and sunday. And we will look back years from now, and exclaimed, ‘this was the time when the promise was realized, prosperity forged, suffering overcome and a new era of progress began’.
That out of the way, the Akwa Ibom State Legislature has confirmed the appointment of Akparawa Ephraim Inyangeyen with eighteen other commissioners and two special adviser nominees into the state executive council. However, the confirmation followed the screening of the nominees by the lawmakers yesterday, Thursday, July 4, and unanimous approval of their appointment.
Akparawa Inyangeyen who, before now,  was Governor Udom Emmanuel’s Commissioner, serving the state as a Commissioner, in charge of Ministry of Works was yesterday on the floor of the Akwa Ibom State House of Assembly confirmed and cleared to be sworn in as Commissioner.
Why Ephraim Inyaneyen again? Someone may ask! Now hear this, ‘most success stories you will hear are a product of extreme diligence to duty, it prompts long lasting and extreme action’. This, in a few words has clearly explained why Akparawa Ephraim Inyangeyen was confirmed, and cleared to be sworn in as Commissioner, by the AKHA, after his work profile was  critically examined by the Akwa Ibom State House of Assembly Committee on Judiciary, Justice, Human Rights and Public Petition.
Before l continue, let me quote the immediate past Special Assistant to Governor Udom Emmanuel on Research and Documentation, Mr. Emmanuel Nicholas (Whyte Bombay); “Ephraim Inyangeyen is a  diligent worked’, end of quote. And if l may add anything, l will say that, this is true about the person of Akparawa Ephraim Akparawa Inyangeyen.
Inyangeyen, who had faithfully beared to his responsibilities, as a Commissioner then, was saddling with a key sector in Governor Udom Emmanuel-led government, and whose work, he treats as a military warfare, who knows perhaps, because of his military background. Almost on a daily basis, Ephraim Inyangeyen, will visit construction sites to acertain the level of work done on those project sites.
This man is committed to quality service delivery. Perhaps, this is what the state Legislature saw, and then decides to extend this attribute, as they confirmed and cleared Akparawa Ephraim Inyaneyen to be swon in as commissioner into Governor Udom Emmanuel-led government. For me however, this is a good way of encouraging him to continue in exploiting his reservoir of wisdom, with a view to contributing same to the realization of Akwa Ibom project.
His Profile At A Glance:
Akparawa Ephraim Akparawa Inyangeyen, is the Onna born erstwhile Customs officer, born on November 25, 1965. He attended Etinan Institute, Etinan; School of Basic Studies, Akamkpa, Cross River State; and several universities within and outside Nigeria. Professionally, Inyangeyen taught briefly in the old Cross River State Teaching Service Commission; worked as a Chemist with the Nigerian Railway Corporation and joined the Nigeria Customs Service as an assistant superintendent of Customs in August 1990.
While at Customs, Inyangeyen maintained a good and dignified career, serving as the Special Assistant to the Operations Commander, Apapa Port; Command’s Public Relations Officer, Bauchi State; Staff officer, Apapa Port Command; Head of the Armoury Unit, Jos Command, among others. He has attended many courses among which are: Customs and Excise course; Customs and Excise Refresher course; General Scanner Training Course; Train-the-Trainer Delivery Skills for the Customs Services; Chief of Superintendent of Custom Leadership among others.
On his return to serving his father land, Inyangeyen founded a formidable social-political organization called, Transformation Initiative For The Empowerment Of Ibom People, and subsequently, emerged the Chairman, Board of Trustees of the Transformation Initiative in Akwa Ibom. This was the socio-political organization that worked assidiously and tirelesly for the emergence of the Governor Udom Emmanuel-led government in Akwa Ibom.
Akparawa Ephraim Inyangeyen, who is a Fellow, Institute of Management Consultants and recipient of many awards, holds a B.Sc in Chemistry, and a M.Sc in Business Administration,  as well as, a Phd. in Business Administration. He is happily married with beautiful children.
2019-07-05
dozzier