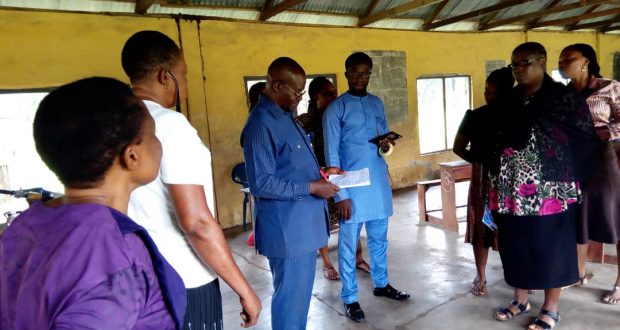 The Special Assistant to Governor Udom Emmanuel on Education Monitoring, Akparawa Udeme Udofia has called on teachers in Akwa Ibom State to adopt total education techniques of imparting knowledge to the upcoming generation.

He made the call while addressing principals and headteachers of schools in Oruk Anam local government area when he embarked on routine school monitoring exercise to ensure teachers adopt the total educational teaching method to reinvigorate teaching and learning processes.

Udofia reiterated the value of sound education in children, saying it was important to equip them with high-quality education to boost their character formation and prepare them for a better tomorrow.

Speaking at Annang People’s School, Obio Ndot, Oruk Anam, where out of the twenty-one teachers in the state government employ, only nine were present in school, the SA condemned the level of laxity exhibited by some teachers pointing out that If such is allowed to continue, the state educational system will be completely paralysed.

The school counsellor Mrs Elizabeth Victor Akpan, who stood in for the Principal, begged for pardon for the erring teachers and assured the monitoring team of a change of attitude.

At government Primary School, Ata Obio Akpa, students were found loitering about the unkempt school compound with a handful of teachers, while others strolled in after 9:45am when teaching would have started by 8:10am. Udofia frowned at this unseriousness behaviour, describing it as an act to jeopardise the state government’s effort in upgrading the sector. He observed that when the children are left unattended to it gives room for them to be indoctrinated negatively thereby laying a foundation for social vices.

He however, commended those who are committed and encouraged them to keep to the ethics of the profession, watch their dress code and use their general behavioural pattern to entice and motivate the young minds to choose teaching as a professional career instead of leaving it as ‘every comer’s affair, noting that learning is very easy in the 21st century as information in various channels and on the net can aid students to be properly informed.

The Governor’s aide used the occasion to call on teachers both in public and private schools in the state to shun acts capable of tarnishing or truncating students’ academic pursuit but to put in their best to inculcate good moral values that will assist them in their career as well as place them advantageously where they can compete favourably with their counterparts in other states of the federation.

When the team visited Community Secondary School, Mbiakot, Oruk Anam, on the thorough check, it was discovered that a particular teacher had stayed away from class for up to four days unnoticed by the principal, Mrs. Becky Ennang. The SA took time to check some notes of lesson while addressing the staff of the school and informed the staff that school monitoring is not to witch-hunt but to keep teachers awake to their responsibilities as anything outside this, is a display of the highest degree of irresponsibilities and a breach of their appointment contract.