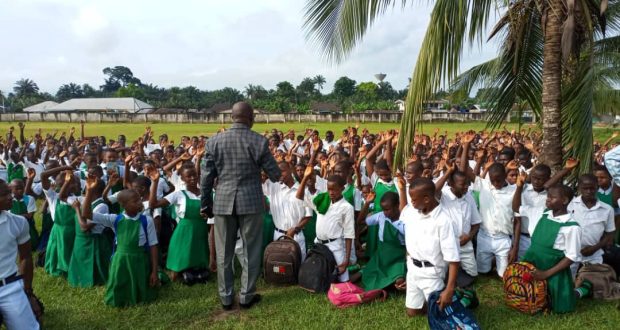 Udom’s Aide Talks tough on students …lambast Teachers for not living up to expectations.

The Special Assistant to Governor Udom Emmanuel on Education Monitoring Akparawa Udeme Udofia has regretted the poor and nonchalant attitude displayed by some teachers despite the government’s effort in providing qualitative education to the citizenry.

In the early hours of Monday morning, during his routine monitoring exercise. Udofia, who was on his way to Ikot Abasi/ Mkpat Enin for monitoring, had to stop over at Etinan Institute, because of the magnitude of students he found loitering on the road as at 8:15 am up to 9 am. Udofia was disappointed with the high level of indiscipline on the part of the students ranging from incorrect uniforms, funny haircuts, and lateness. As well as over 500 students came to school late without any effort by the school management to correct the wrongs as teachers themselves we late to school.

Udofia sent a strong warning to teachers who abandoned their duty post to develop their businesses to the detriment of students, assured them that he will do all in his power to correct the abnormalities in the system.

He bemoaned why Teachers who are well taken care of by the government, will want to sabotage and render the government’s efforts useless, leaving their duties to the students, to write on the board for other students to copy, with a lot of mistakes.

Speaking with some community members, immediately after the monitoring exercise, on efforts made so far by the government in repositioning the educational sector. Mr. Aniekan Use, a trader, in Etinan, thanked Governor Udom Emmanuel for his ingenuity and fantastic Leadership prowess in mostly all the sectors of the state economy, most especially the education sector. He commended the governor for the recruitment of 1000 Teachers for the secondary schools, across the state, saying, it will boost the strength of teachers.

Others who bared their minds revealed that successive administrations in the state even with abundant resources did not make such considerable impact during their tenure describing governor Emmanuel’s strides in the education sector as a step in the right direction, hoping 1 that he will do more for Akwa Ibom people.

However, the principals in most of the schools visited appealed for time to be able to correct the abnormalities as they were newly posted to the schools. Some of the schools visited were; Etinan Institute, Etinan,
Along with community Grammar school,
Along, Mkpat Enin,
Community Secondary Commercial, Ikot Ebiere
QIC School, Iman, Ikot Abasi,
St Nicholas Group School, EdemAya, Ikot Abasi,
Comprehensive Secondary, Ikot Esenam, Oruk Anam and St John Central school, Asong, Mkpat Enin