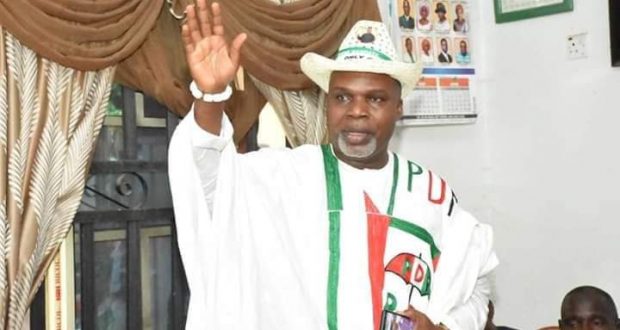 The Chairman of the Peoples Democratic Party (PDP) in Ikono Local Government Area, Chief (Barr.) Moses Akpan, has reiterated his confidence in Governor Udom Emmanuel to repositioning the state, maintaining the former Zenith Bank Manager has a sustainable development plan for the state.

Chief Akpan stated this, while fielding questions from newsmen in Ikono, over the weekend.

Continuing, the former Special Assistant to the Governor on Project Monitoring said the State Chief Executive has shown serious commitment to the development of the state since he came into power in 2015, describing the Governor’s leading style as sterling and unparalleled.

The PDP Chairman noted that Governor Emmanuel has ensured a safe return on investments, saying the various industries spanning across the state are testaments of the Governor’s resolve to leave the state better than he met it.

He particularly commended the Governor for the establishment of Ibom Airline, adding that the Airline has branded the state positively, before the international community.

He said the PDP was able to scale through the last general elections in the State as a result of the Party’s organized structure, adding the Party’s victory at the polls, will see to robust security, peace, progress, unity and development in the state

On the gains of the current administration in Ikono LGA, Akpan cited the renovation of the Ikono General Hospital, construction of the Nnug Ukim Road and upgrade of the School of Arts and science, to a College of Science and Technology, as some applaudable strides recorded by the Governor in the area.

He however appealed for more government projects in the area and also made a case for the zoning of certain political offices to Ikono.

On his contributions to the development of Ikono, Chief Akpan revealed that he has paid school fees and sponsored skill acquisition programs for Ikono indigenes, and promised he will do more as a way of giving back to the society. Obong Barr Moses Akpan who is fondly called as the “Moses of our time” brought his managerial skill to bear along side other stakeholders in the area which led to the success of the last general elections despite the political tsunami that hit the Local Government Area.

He commended the state PDP Chairman, Obong Paul Ekpo for his leadership prowess, and vowed to continually work with and support Obong Ekpo to move the PDP forward.