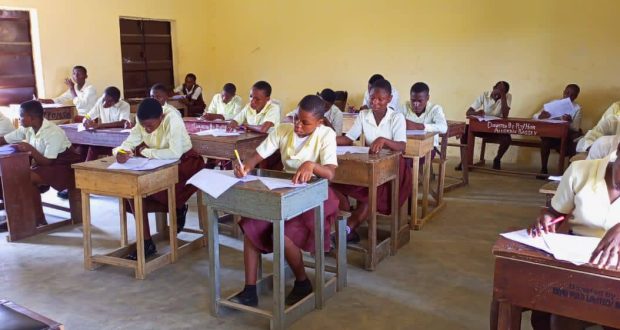 … says govt is working to provide needed environment for learning

The Special Assistant to Governor Udom Emmanuel on Education Monitoring Akparawa Udeme Udofia, has advised students to study hard and avoid cutting corners through examination malpractices, cautioning that it is punishable by law.

Udofia made the call Tuesday, recently during his routine school monitoring to schools in Uruan and its environs.

During the visit he stated that it is easier for one to go slowly on his or her abilities than engage in exam malpractice as it would make one loss confidence in one self.

Explaining the effects of Examination Malpractice on National Development. Udofia added, that the frequency of malpractice indicates hopelessness for the country.

He restated that the calamity of malpractice is not just the havoc it wrecks in our educational system, but the gradual introduction of youths into fraud, social vices, which is currently threatening to cripple the nation .

He listed effects of malpractice to include, production of half-baked graduates, lowering of academic standard and lack of confidence in the country’s educational system, as some of the adverse consequences of examination malpractices.

Udofia used the visit, to assured major players in the education sector that the Akwa Ibom State government under the watch of Gov. Udom Emmanuel is making concerted efforts to provide the needed environment for learning to thrive.

During the tour Udofia adviced all vice principals saddled with examinations supervision to keep an eye on the type of question papers presented to the students to ensure typographical error are minimize if not completely avoided. He frown at the lackadaisical attitude of the members of the National youth service corp sent to schools in the state , he admonish them to be committed to their responsibilities , dress well to present themselves as role models to the students instead of introducing them to indiscipline and truancy.
At community Secondary school ,Ifiayong Usuak, he queried the porous nature of the school security network whereby visitors are allow into the school premises to interact with students unquestioned.
The visited the following schools; Comprehensive High school,Odu Uruan; Community Secondary Commercial S.school; Holy Trinity College,Mbiakong ,Uruan; Community Secondary Grammar school, Ikot Akpabio,Norther Iman, Etinan and Teeves International schools Nsukara Offot.