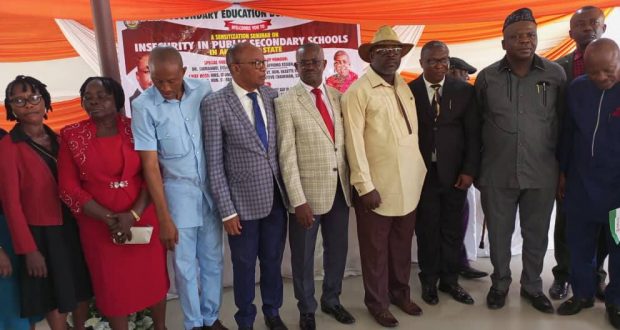 The Special Assistant to Governor Udom Emmanuel on Education Monitoring Akparawa Udeme Udofia, has urged Akwa Ibom people to come together to confront the challenge of insecurity in our schools.

Udofia, who joined other stakeholders in the education sector for a three Day Sensitisation Seminar on Insecurity in public Secondary schools in Akwa Ibom state, stated that insecurity can only be addressed when all hands are on deck to fight it.

Udofia himself,an education administrator, expressed optimism
that the synergy amongst all stakeholders will in no small measure contribute to the building of a vibrant and better society for all, while calling on youth leaders in various communities to take the fight against insecurity as a collective effort, saying Government cannot do it alone.

Representing the Secretary to the state government,the SA on education monitoring while giving the key note address called on all participants to regard the seminar much more than mere paper work but to put all recommendations into practice.
He also recommended that values and virtues used in moulding characters in the olden days be put back to use , saying it will help buffer the level of immoral activities and excessive love for money, irrespective of how it is gotten. The governor’s aids advocated that the fight should start from the foundation, the home, lamenting, how some parents neglect their core responsibilities in pursuit of money.

In her opening remarks, Executive Chairman, State Secondary Education Board, Dr. Ekaeter Ebong Okon, thank governor Udom Emmanuel for the huge investment in the education sector and his timely response to this clarion call of sorting means to stem insecurity in our schools.

She said “This seminar is another proof that His Excellency has the interest of the future of every Akwa Ibom child at heart.”

Ebong noted that, education is a collective responsibility for parents, community leaders, school heads, and students, praying that the seminar will chat a way forward on modern ways of tackling insecurity in our schools.

In his paper presentation, Dr. Enobong Joshua, Associate professor and head, department of Mathematics, University of Uyo, who spoke on the topic; The Roles of Community Leaders in Providing a conducive environment for academic excellence, explained that Community Leaders and other stakeholders should from time to time interface for a more promising future.

The University Don, said that community should exhibit interest in their children and in the school originally built by their forebears, to maintain an open, strong, transparent and effective communication with education authorities. Said such partnership will reduce insecurity.

Also speaking on the effect of drugs abuse on academic performance of secondary school students in Akwa Ibom State, The state Commandant, National Drugs Law Enforcement Agency Mrs Obot ,said that security could only be enhanced and achieved through collaborative efforts amongst all security agencies, parents , community leaders and students as drugs, according to her is a major facilitator of many crimes in our society, among secondary school students.

The event which held across the three senatorial district was organized by State Secondary Education Board (SSEB).