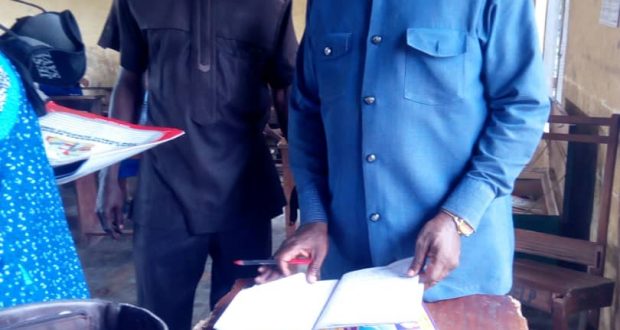 Special Assistant to Governor Udom Emmanuel on Education Monitoring Akparawa Udeme Udofia has called on Vice Principals of Schools in Akwa Ibom State to prepare themselves to take up big responsibilities while under their principals, saying they can only have sound school administrative prowess if they submit themselves to the rigorous process and learn from their principals.

Udofia appealed on Thursday during his routine school monitoring in Ikot Ekpene senatorial district, remarking that the dignity of the teaching profession must be sustained. He added that the quality of teachers’ focuse and commitment would visibly reflect in the competence of pupils and students produced from the various schools.

Udofia himself, an astute education administrator averred that Governor Udom Emmanuel led administration has done the education sector well, as enormous resources have been channelled to improve the quality of the sector. He further emphasised that all hands must be on deck to complement the efforts of the State government.

He frowned at the lateness of some teachers/ students, queries why teachers in the private schools with less pay should be more competent and committed than those in the public schools. He, therefore, called on the principals/heads of schools to enforce the strictest disciplinary actions on erring teachers/ students to serve as a deterrent to others.

He opined that teachers of old were revered and given preference in private and public space because of their roles in shaping the society as against the social vices that have deeply ravage the fabric of the once peaceful society, communities, states and nations of the world due to negligence.

At State secondary commercial school, Okopeto in Ikot Ekpene the SA appreciated the central positioning of the principal’s office which gives a wide view for monitoring and recommended the same to other schools.

He emphasised that principals and school heads should beef up their managerial capabilities and take the bull by the horns to ensure the system complement government’s effort for the sector.

He, as well, called on teachers to be more focused, dress well and morally justified the high pay and job security they are enjoying in the public sector, more so, in pursuit of their professional attainment. Schools visited were Government School, Ekoi, Ikot Ekpene. Methodist School Ikot Abia Idem, Ikot Ekpene

Previous: Ibom FADAMA Microfinance Bank Sets to Commence Operation … As Board Chairman pays on the Spot Inspection visit
Next: FG Moves To Recover Over 40% of Uniuyo Encroached Land