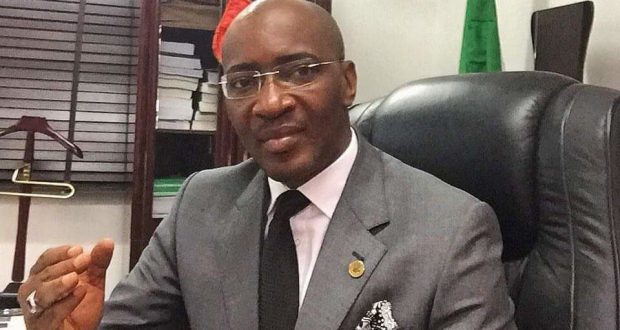 UCCDA set to relocate to Permanent Secretariat after 31 years

The Executive Chairman of Uyo Capital City Development Authority, UCCDA, Prince Enobong Uwah has announced plans to relocate to the Permanent Secretariat of the Authority, which has been completed and ready for inauguration by Governor Udom Gabriel Emmanuel.

Prince Uwah dropped the hint yesterday (Wednesday June 19), when he led a team of UCCDA Staff and News men to inspect the massive edifice, which he said, was embarked upon to save the Akwa Ibom State government enormous amounts spent on the rented apartment for 31 years since the establishment of the UCCDA . Prince Uwah commended the effort of all staff and those involved in the execution of the project for it’s timely completion and building to specifications, maintaining that, this was in line with the vision of Governor Udom Gabriel Emmanuel in futherance of truly making UCCDA perform effectively by providing a conducive work environment for the Staff.

The UCCDA helmsman thanked Governor Emmanuel for his unwavering support for the UCCDA, without which, he stressed, the governing Board of the Authority would achieve nothing and the Secretariat project would not have become a reality. Prince Uwah explained that, there was no justification for the agency not to develop it’s own accommodation through funds generated by the UCCDA, adding that, under his watch, , the UCCDA is humanized, people oriented and has restored public confidence in her operations, with zero tolerance for bribery, grs and sharp practices.

He also thanked Atan Offot Community, including traditional rulers, youths and women groups, for not disrupting the project, thus enabling its speedy completion and for maintaining their reputation as good hosts to so many public institutions sited in their community.

On the ongoing demolition exercise by the UCCDA in Uyo, Prince Uwah explained that, the Airport Road and Goodluck Jonathan Boulevard among other major roads are the entry points to Akwa Ibom State, and as such, the government will not sit idly and watch ramshackle structures, shanties, illegal constructions, and buildings or containers deface the beauty of the metropolis.

He charged those who are developing buildings to stick to the appropriate and approved specifications by the UCCDA to avoid demolition of such structures as there will be zero tolerance for abuse of the city master plan. He warned against resorting to giving bribes to any UCCDA staff , warning that the consequences will be dire even as he charged the public to report any UCCDA staff who demands a bribe to his office.

Prince Uwah also appealed to those who have been trading illegally along the Airport road to stop forthwith and move their wares to the main market as their activities have not only become an environmental nuisance, but a threat to the safety of road users, causing serious traffic jams and accidents. He UCCDA’s enforcement units are ready to clamp down on all the illegal markets to restore sanity.

In his remarks, the Head of Administration and Secretary of UCCDA., Mr. Edwin James lauded Prince Uwah for the hard work and capacity to interpret the vision of the governor for Uyo metropolis. He explained that, Prince Uwah has written his name in gold and carved a niche for himself in history by being the Chairman who built the Permanent secretariat for the UCCDA, describing it as pacesetting.

Mr. James thanked Governor Udom Emmanuel for identifying and appointing Prince Uwah to oversee the UCCDA as a competent hand with capacity and the Midas touch to make an impact wherever he goes to serve, adding that, Prince Uwah has revolutionized the agency and lifted the UCCDA to the greater pedestal in the execution of her operations.

It will be recalled that Prince Uwah on assuming office on June 2017, described as unacceptable and shocking, that, the UCCDA was operating from a rented facility and vowed to build a permanent Secretariat for UCCDA and relocate the agency to save money for Government.

Accordingly, the foundation stone laying ceremony for Phase one of the Permanent office building of the UCCDA was performed by Governor Udom Emmanuel who was represented by the erstwhile Commissioner for Lands and Town Planning, Arc. Ime Ekpo on Friday, June 8th, 2018.

The UCCDA was established by the 1988 Edict, to control developments in the Uyo capital city by the Akwa ibom State Government.