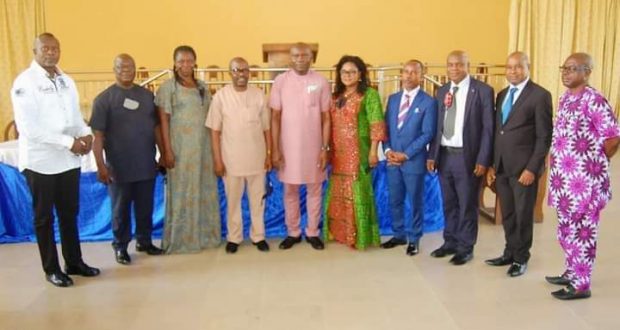 …as Provost restates stance on fairness

It was a historic and joy-filled moment on Thursday, March 11, as two staffers of the Akwa Ibom State College of Education, Afaha Nsit who were overdue for promotion, emerged new Deputy Provosts of the institution.

Officially inaugurating the Deputy Provosts during a Special Academic Board Meeting of the College held at the school Mini Theater, the institution helmsman, Dr Daniel Udo, revealed that the duo clinched the enviable positions after a strict, fair and credible voting process, which staffers were given an open playing ground to choose their choiced candidates.

Another cardinal criteria for their selection according to Udo was that the two top candidates must hail from Eket and Ikot Ekpene Senatorial Districts accordingly in order to strike a balance since the school management observed that he ( Provost) hails from Uyo Senatorial District.

The Provost further informed that the management of the school also paid keen attention to gender sensitivity in the course of the selection, adding that this was also to create gender balance as promoted in the school.

Welcoming the Deputy Provosts on board, Udo said the Chief Lecturers have had high administrative experiences, therefore, management and the staff are confident that they will deliver on their job responsibilities.

He thanked the outgoing Deputies on meritorious service rendered and tasked them “to leave their doors open and phones on, whenever and however, so the Provost can tap from their experiences in matters of decision and policies of administration in the college.”

Further, Udo reassured the college of his commitment to his policy of fairness across boards and efforts to fast track more development to the college.

In his remark, the new Deputy Provost Academics, Dr Albert Archibong, thanked God for making the day a reality. He appreciated the management and his colleagues for finding him worthy of the position.

In his words: “In this matter, you have been fair. Looking at us (Deputy Provosts), we have been here for a long time, right from the beginning of the college. Maybe some of us would have retired without being Deputy Provosts. For finding us worthy, we will not take this opportunity to serve for granted.”

Similarly, the new Deputy Provost Administration, Dr Edo Obot Ekanem, pledged to give her best to serve the college and to positively project the image of the institution.

In their separate remarks, the Outgone Deputy Provost Administration, Dr Kingsley Ibritam, and Deputy Provost Academics, Dr Esther Andrews, thanked management of the college and the staff for the cooperation and respect accorded their offices while they served the college.

While Dr. Albert Archibong, a chief Lecturer in the Department of Integrated Science who joined the college at its establishment in 1991, is the former member of the College Governing Council, HOD- Integrated Science, Dean School of Science, Director, Directorate of Continuing Education and Chairman, Committee of Deans/ Directors.

The academic board meeting witnessed Management staff of the College, Council members, Deans of Schools, Directors, Heads of department amongst others in attendance.

Previous: STATE OF THE NATION A LANDMARK DEVELOPMENT, PRESIDENT BUHARI COMMISSIONS NDDC BUILDING 25 YEARS AFTER
Next: UNIPORT ALUMNI ASSOCIATION SET TO TAKE THE LEAD IN RESEARCH AND DEVELOPMENT