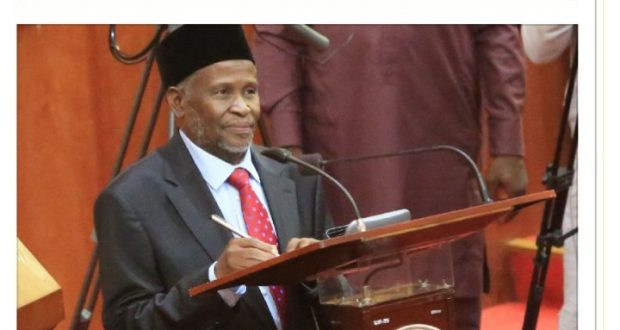 The senate has confirmed Ibrahim Muhammad as chief justice of Nigeria.

He was confirmed at plenary on Wednesday.

The senate had earlier gone into a closed-door session over his confirmation.

The upper legislative chamber went into the session after Abdullahi Abubakar, senate leader, moved a motion for the confirmation of Muhammad.

On Tuesday, Senate President Ahmad Lawan had asked that copies of Muhammad’s curriculum vitae (CVs) be shared among the senators.

Muhammad has been occupying the office of CJN in acting capacity since January.

He took over the office after President Muhammadu Buhari suspended Walter Onnoghen over alleged misconduct.

Born December 31, 1953, Muhammad obtained his West Africa School Certificate in 1973. He was awarded a law degree by the Ahmadu Bello University, Zaria in 1980.

He later obtained master’s and doctorate degrees from the same university in 1984 and 1998 respectively.

In 1981, he was appointed as chief magistrate of the high court of the federal capital territory

Previous: Senate President Ahmad Lawan says the delay in appointment of ministers will not affect the presentation of the 2020 budget.
Next: Gov Emmanuel task NPC on credible census