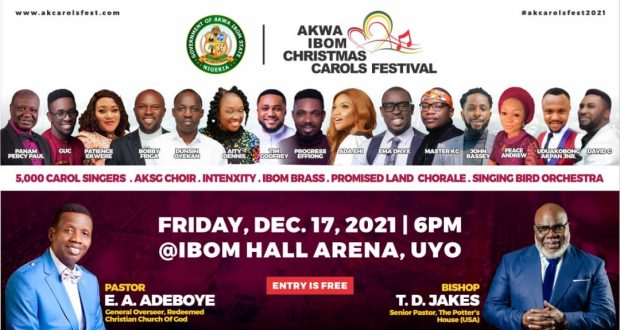 Like a phoenix, the world is rising from its ashes after a ravaging global pandemic. Dubai, the epicenter of world’s innovation, is finally hosting the much awaited EXPO 2020. The global football community is back to intensively debating the integrity of the much revered Ballon d’Or award after the 2021 edition. With countries opening up again for business and leisure, and travel bans slowly relaxing, the global economy is kicking again. The world, that had literally stopped for almost a year, is back on motion, and really picking up very fast, because there is a lot of catching up to do.

In few days, Akwa Ibom, a state in Nigeria’s South-South region, will be on the global spotlight with the return of the Akwa Ibom Carols Festival, one of the biggest carols festivals in the world. This year’s edition of the carols festival is tagged “The Return” obviously because the event, which has remained an annual festival since its maiden edition in December 2008, could not hold in 2020 due to the pandemic. “The Government of Akwa Ibom State wishes to inform the general public that the 2020 Edition of the state’s award winning Christmas Carols festival has been cancelled,” the State Commissioner for Culture and Tourism, Orman Esin had announced in a statement in December 2020. “This development is hinged on the logistics challenge posed by the global lockdown and international travel restrictions caused by the COVID-19 pandemic, in addition to the burgeoning threat of a second wave of the virus.”

However, with the worst days of the pandemic apparently over and the world slowly returning to normalcy, it was announced that the 2021 edition of the carols festival will be a reality. “The Akwa Ibom Christmas Carols Festival is set to hold its 13th edition come Friday, December 17, 2021,” an official hinted. “The event, which is an annual festival, is a night of songs and worship organized by the Akwa Ibom State Government and this year, it returns in a glorious manner at the magnificent 55,000-sq. metre Ibom Hall Arena, along Ibrahim Badamusi Babangida Avenue (IBB Avenue) in Uyo.”

The choice of this year’s theme; “The Return” is both a testimony and scripturally, a revelation. Like the rest of the world, Akwa Ibom was hit by a devastating pandemic unprepared. As the State Governor, Mr. Udom Emmanuel had often said, nobody was prepared for coronavirus and no Pastor foresaw or prophesied about it. Despite all the gloomy predictions, the state came out strong with one of the lowest casualties in the country. On December 17, the Christmas Carols Festival will be returning as a testimony that the state is recovering from the rampaging impact of the pandemic. The theme of the festival is drawn from The Bible verse Isiah 51:11 (KJV), “Therefore the redeemed of the Lord shall return, and come with singing unto Zion; and everlasting joy shall be upon their head: they shall obtain gladness and joy; and sorrow and mourning shall flee away”.

The festival brings public figures, religious and community leaders, and people from all walks of life from far and wide together in worship to the Almighty God and aims to strengthen the bond of unity in Akwa Ibom State. The Carols Festival creates a spectacular worship experience and a conducive ambience for spiritual growth and peaceful co-existence. With the arrays of international gospel ministers and music groups that have performed in previous editions of the festival, Uyo, the state capital, will once again play host to an international special guest. According to the details of the event, the Senior Pastor of The Potter’s House Church, United States of America, Bishop Thomas D. Jakes will be the Officiating Minister. Bishop Jakes had even confirmed his attendance in a short pre-event clip, and this will be his first ever visit to the state.

Over the years, the festival has gotten bigger and bigger. Notably, the Udom Emmanuel administration has given priority to the spiritual side of the festival with the invitation of renowned clergymen and gospel music ministers. “Also in attendance will be the General Overseer of the Redeemed Christian Church of God, Pastor Enoch Adeboye,” a statement on the event reveals. “The 2021 Festival will feature a predominantly Nigerian line up of renowned gospel music ministers including the legendary Panam Percy Paul, and other award winning gospel singers like Tim Godfrey, Dunsin Oyekan, Ada Ehi, Aity Dennis, Bobby Friga, David G, Ema Onyx, GUC, Progress Effiong, John Bassey, Patience Ekwere, Peace Andrew and Uduakobong Akpan Jnr.”

In 2014, the festival was awarded the Largest Group of Carol Singers in the World by the Guinness World Records. This year’s edition will feature 5,000 singers from the award-winning 25,000-singer choir. “Apart from the 5,000 carol singers, other choir groups that will perform this year are the host choir, the Akwa Ibom State Government Choir, The Promised-Land Chorale Int’l, Intenxity and Ibom Ochestra. Another special appearance and the only non-Nigerian performer will be the multi-award winning South African DJ and musician, Master KG,” the statement further stated.

Ibom Hall Arena, the venue for the festival, holds a much bigger space – a seating capacity of over 40,000, a larger parking space and many pedestrian and car exits to grant the routinely increasing number of worshippers, who attend the festival, safe and effortless access to the arena. This will be the biggest religious gathering in the state in the post-pandemic time, and like the previous years, Akwa Ibom people and indeed, Christians across the country, are very eager to relive that feeling that only the Akwa Ibom Christmas Carols Festival gives. It is The Return.