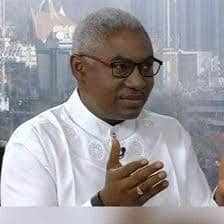 It was Abraham Lincoln who defined democracy as a Government of the people, by the people, and for the people. That definition of democracy is popular throughout the world. Since this definition was propounded by the former United States of America President, no one has attempted to define it differently. But recently in Akwa Ibom State and by extension, Nigeria, that definition has taken a primitive concept.

Is it not preposterous, absurd, ridiculous or contrary to reason or common sense that a representative, elected by the people becomes the leader and not the servant?

If I send you to buy groceries for me and you accept, do I not deserve to have an account of each item and the cost?

Who told us that our representatives, under the mandate we gave them are the bosses? Democracy is greatly misunderstood! In the exact words of Arc. Ezekiel Nyaetok “You are my servant”. This means no disrespect! But clearly, it’s about accountability and accepting corrections.

In recent times, we have been arguing on LG Autonomy and some LG Chairmen in Akwa Ibom State held the view that Financial Autonomy as directed by the Buhari led Administration was “draconian in nature and highly against the constitution”. One would have expected that these Chairmen, by the passage and implementation of this LG Autonomy and confirmation by the Judiciary and Legislators, will resign their appointment immediately.

Yes! This is how democracy is practiced. In 2005, when Tony Blair’s popularity fell as a result of the Iraq war, he simply resigned. British prime Minister, David Cameron resigned after Brexit Vote (this was against his intention for his people), quite recently, Theresa May resigned as a result of failing to deliver Brexit. In Nigeria, Finance Minister Kemi Adeosun led by example by resigning her position over what she termed as “allegations of using forged certificate to avoid participating in the country’s mandatory one-year national youth service scheme”. It is therefore not irrational to demand same from people who tried to stop the LG Autonomy.

Quite sickening was that, it was my Local Government Chairman that appeared on radio to antagonise the LG autonomy on behalf of others. Hmmm…Ikono shall be great again!

In another development, a first-time lawmaker in Ikono/Ini Federal Constituency recently announced the appointment of 50 Special Assistant to his office which violated the provisions of SAs as enshrined in the National Assembly act as amended.

In a publication rolled out, he listed the offices of SAs to include but not limited to SA Special Duties, SA Protocol, SA youth matters, SA Community Development, PA community relations and even SA Women Affairs.

Meanwhile, as provided by the National Assembly act, each lawmaker, excluding principal officers, is entitled to five aides- 1 Senior Legislative aide, 2 legislative aide, 1personal assistant and 1 secretary ( please note the designations of these aides and compare with the once mentioned above.

As concern citizens, with good intensions we queried this for a number of reasons: first is setting a poor precedent, next is giving constituents unrealistic expectations (because the salaries, entitlements and severances of the official aides are public document, least the other 45 be expectant), and lastly was to protect our law maker’s reputation in the future.

We anticipate a situation where someone he was giving stipends as empowerment, may mistake it for a right because of the name assigned to it, thereby claiming damages in future.

Nigeria has been on the path of perdition because recurrent expenditure has consistently gulp more than 80 per cent of the budget, leaving too little for development.

Modernization and developmental programmes have been sacrificed on the altar of an ever-spending government. So, for a third-class Federal Constituency, with little or no social amenities like Ikono/Ini, moving on the path of recurrent expenditure by an over blotted number of Special Assistants was a thing of worry to well-meaning constituents.

What did we get? Series of backlashes and poorly written scripts from the same youths whose interest have always been our concern. They rejoined with all sought of fabricated excuses forgetting that these are not times for excuses and unnecessary explanations.

*Senator Godswill Akpabio is on record to have had the highest empowerment of constituents and constituency projects in Akwa Ibom if not in Nigeria, yet did not announce 50 SAs to his credits despite representing a Senatorial district and not a Federal Constituency.

Empowering constituents can never be the same as appointing Special Assistants with clearly defined functions as if a Federal Constituency equated with a State with ministries like Women Affairs, Rural Development, etc.

While we defend our interests, we should have it at the back of our minds that the day of reckoning is already here with us. The fluctuation in oil price is an indication in that regard. Let’s wait and see how the bloated apparatus of patronage erected over the years will not collapse under the weight of declining oil revenues.

Let’s reason towards the future and appreciate constructive criticisms for the development of all and sundry, as democracy entails this.