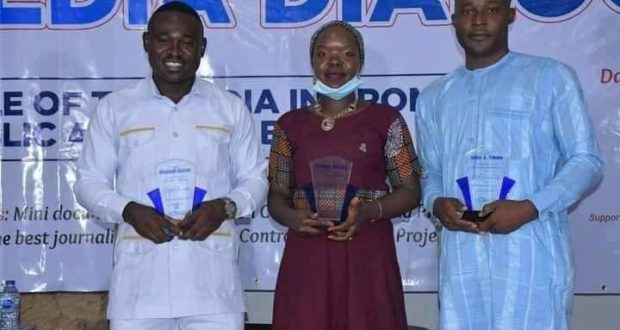 Ekemini Simon, a reporter with The Mail Newspaper has been crowned the best investigative Journalist on the Open Contract Reporting Project (OCRP) by the International Centre for Investigative Reporting (ICIR).

Simon was announced the winner of the prestigious award on Wednesday, November 24, 2021 at the Nigeria’s Federal Capital Territory (FCT), Abuja during ICIR media dialogue and award ceremony.

The Mail reporter was bestowed with the first prize award while two other Journalists, Yakubu Salisu of Metro Daily Nigeria and Medinat Kanabe of Premium Times respectively emerged first and second runner up.

Simon emerged winner of the award out of the 108 journalists who were on the Open Contract Reporting Project across the country.

it could be recalled that during the first quarter of 2020, 108 Journalists (three chosen per State) drawn from the online, print and electronic (Television and Radio) media across the six geo-political zones of Nigeria were shortlisted, trained and given opportunity for funding support on investigative reports.

Funded by MacArthur Foundation, the OCR project is designed to build capacity for Nigerian journalists to investigate and write about budgetary and procurement issues, with a view to promoting accountability and transparency in the public sector especially at the subnational level.

Previous: A’ Ibom Medical Students Are Always Blessed with Good Leaders~Dr Valerie Obot
Next: 365 Days of Nyakno Okoibu in office: A sparkling cursor of a Greater Ikono Project