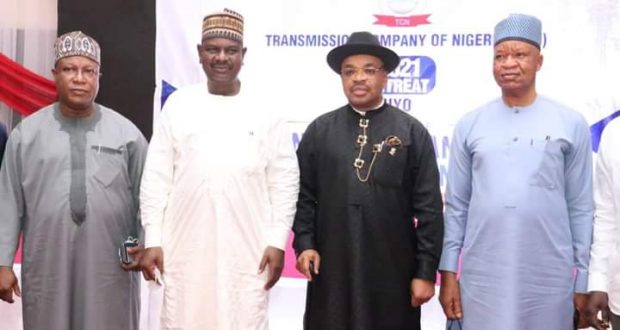 A 3-Day capacity building training for top management team of the Transmission Company of Nigeria TCN, has ended in Uyo,the Akwa Ibom State capital, with assurance by governor Udom Emmanuel that the expectation of Akwa Ibom people in area of efficient and sufficient power supply will be achieve December 2021.

Addressing the Ag. MD/CEO of TCN Sule Ahmed Abdulaziz, Executive Directors, Managers and Regional Heads of the company, the governor explained that power is the engine room of the Nigeria economy hence his administration’s commitment to achieving 24 hours electricity for all households in the state by December, 2021.

The State chief executive, call for better collaboration between TCN and the AKSG to enable the company accomplish its role in the power supply value chain, while urging them to expedite action toward completing the ongoing Oron sub station and the Eket Oron transmission line to boost power supply in the state for businesses to thrive.

“I am here because i understand the impacts of power supply to the nation’s economy, what food does to the body is what power do to the economy. The investments made in the power sector may not really be seen immediately and whatever is being counted as achievements of an administrator may not include power because investment in power cannot readily be seen except when there is a constant supply of electricity.” gov Emmanuel explained.

Consolidating the governor’s speech, Managing Director Ibom Power Company and Senior Special Assistant to the governor on power, Engr. Meyen Etukudo, said Akwa Ibom is the only state in Nigeria that is holistically championing the power revolution and attributed the successes recorded to the undying passion of Governor Emmanuel towards revamping the power sector which he said is a catalyst to the industrialisation witnessed in the state.

He explained that the coming of TCN management team to AKS is a blessing, and a turn around for power supply, as the retreat has afforded stakeholders in the power sector the opportunity to review the past performance of the company and plan for the year ahead.

He disclosed that governor Udom Emmanuel administration under his watch has distributed over 455 Transformers to all affected communities in the state, said his office is working round the clock in ensuring that prepaid meters is distributed to various household in the state, in the shortest possible time.

Earlier in his welcome address, the new Ag. MD/CEO of TCN Sule Ahmed Abdulaziz, said TCN is working assiduously in delivering of its mandate of wheeling generated power to distribution companies nationwide.

Engr. Sule noted that the retreat, which has as its Theme; ” Managing Change In a Renewed Organisation” was focused on the need to create synergies, expand motivation, build trust and exude confidence towards accomplishing better results in TCN service delivery.

According to him, the TCN workers are critical in the power sector and the management team has the requisite talent and potential within each of them to lead the rest of the workers to accomplish set goals and objectives and make a difference in the power sector.

He congratulated Governor Udom Emmanuel for investing hugely in power sector, said such efforts is a practical confirmation that the state government is ready to give her citizens uninterrupted power come December 2021.

The retreat held at Ibom Icon hotel, began on Thursday and ended on Saturday, August 14 with a tour to some various power station in the state.