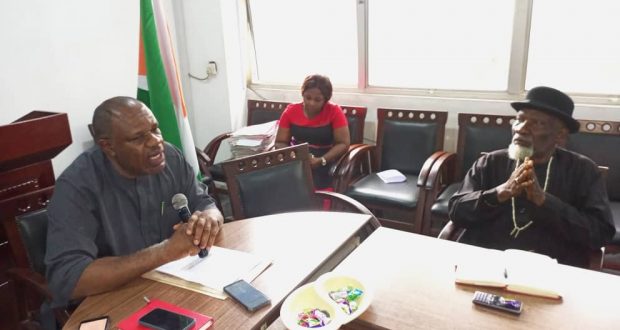 The people of Oku Iboku clan in Itu Local Government Area has appealed to the Akwa Ibom State Government to take over their School – Community Secondary School, Oku Iboku.

Oku Iboku people made the call during a courtesy visit on the State Commissioner for Special Duties and Ibom Deep Seaport, Engr Bassey Okon, Ph.D in his office by the school Management Board, yesterday.

In a letter of appeal addressed to the Governor of Akwa Ibom State, His Excellency, Mr. Udom Emmanuel, which was presented to the Commissioner by the Board Chairman of the School, Senior Apostle George Demson, the Oku Iboku People appreciated the Governor for appointing an indigene of Oku Iboku, Engr. Bassey Okon into his Cabinet.

They described Dr Okon as a man with good up-bringing equipped with adequate moral and academic exposure to discharge his official responsibilities effectively.

The appeal letter, endorsed by the Paramount Ruler of Itu Local Government Area, His Royal Majesty, Edidem Edet Akpan Inyang, indicated that there was only one Government Secondary School in the area, which was inadequate to accommodate the teeming students from the four neighbouring clans of Itu, Oku Iboku Mbiabo and Ayadehe that make up ItuOMA zone in Itu LGA.

In his remarks, the Clan Head of Oku Iboku, His Royal Highness, Etebom (Engr) Ubong Okokon observed that the Community Secondary School, Oku Iboku was one of the biggest Community based Schools in Itu Local Government Area.

He added that the school, when taken over by government, will be one of the best schools in the State.

Etebom Ubong Okokon pleaded with the state government to consider taking over the institution to afford more indigenes of the area and surrounding communities the opportunity to also benefit from the free and Compulsory Education policy of Udom Emmanuel’s led administration.

Responding, the Commissioner for Special Duties and Ibom Deep Seaport, Dr Bassey Okon Commended members of the delegation for having the interest of their community at heart.

He reiterated Governor Emmanuel’s commitment in transforming the education sector of the State.

Engr Okon lauded the visiting team for the mature manner with which they presented their request to the Government, and promised to extend their concern to the Governor.

The Commissioner expressed optimism that the State Governor, being a lover of education, would give their request every necessary attention its deserves.

He pointed out that as part of the state government’s efforts towards educational development, the Governor has approved the award of scholarship to 500 students in the State.

He explained that construction of parameter fencing in schools, construction of class room blocks, recruitment of more teachers, as well as regular payment of salary to teachers were some of the deliberate policies of government towards boosting the education sector.

The meeting was witnessed by Directors and Senior staff in the Ministry of Special Duties and Ibom Deep Seaport.