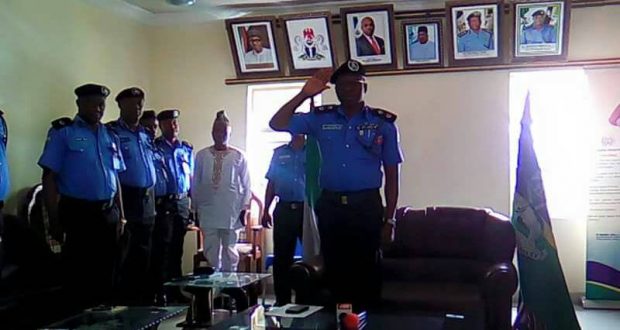 The new Commissioner for police Cp, Adeyemi Samuel recently warned police officers in the State to stop using any formed of monetary attachment, intangible welfare package as an excuse to extort monies from the public. Adeyemi sound this warning during his maiden press briefing with journalists as he assumed duties as the new Akwa Ibom State Command police boss.
He also disclosed that penalties await any offenders and also charged the police officers to always key into the wealth creation of governor Udom Emmanuel by engaging themselve meaningfully. The Commissioner  used the opportunity  to support the continued existence of the special Anti Robbery Square (SARS),in considering its importancy in the arm of force was to tackle violent crime in the Country. Mr. Samuel also spoke in support of restructuring of SARS for the best, and called for improvement welfare package for them considering the hazard faced by the officers in the course of deliver in their duties as often time result in untimely death and it would stand as a great loss to their respective families.
The Commissioner who held from Ondo state with good curriculum vitae was officially recieved by the officers of the D’ division police headquarters Ikot Akpan Abia,said that he is determined to ensure safety and security of the State and also make Akwa Ibom a destination of choice for tourist as well as investors in Nigeria and economics responsibility saddled on the Akwa Ibom police command. CP Adeyemi pledge to make Akwa Ibom the safest State in the Country as He has reviewed the security architecture of the State to reposition the State police command for effective service delivery on the principle of integrity, professionalism and quality service delivery.
The Commissioner of Police affirmed that he is determined to give special attention to the commands tactical units such as Anti-cultist, Anti-kidnapping, Anti-robbery, State Intelligence Bureau and the quick Response Square to effectively Combat crime like kidnapping, Cultism, armed robbery,rape and murder. The CP also warned criminals in the State that their days are numbered and that tough time await as the Akwa Ibom State Police Command will make life so difficult for them to succeed. He called on Akwa Ibom community  to cooperate and collaborate with the police to expose criminal elements while pledging to purse and bring criminals to justice.
Speaking, CP beckoned on the support of other security agencies in the state to ensured public safety and security. He ensewed that he will deepen and also strengthen the relationship with the media for the overall benefit of the masses. Finally Adeyemi, CP commend the effort of the Akwa Ibom State Police Command for ensuring a hitch free yuletide period and sued for continuous loyalty on the part of the officers. He assured the government of Akwa Ibom State that the command will work assiduously to create an enabling environment for job creation, wealth creation,tourist attractio, industrialization and construction engagement of the youth in line with the vision of the State government.
2018-01-09
dozzier

Previous: Cp orders the immediate deployment Of special forces to Eket.
Next: FG forges ahead with plans to create cattle colonies.