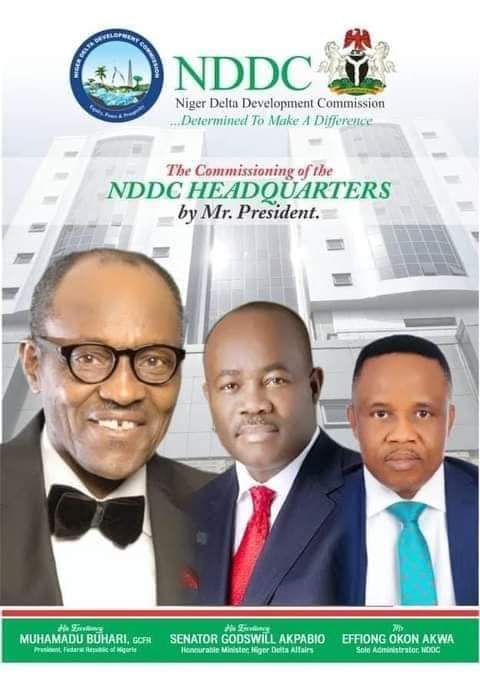 President Muhammadu Buhari Thursday commissioned the headquarters building of Niger Delta Development Commission (NDDC), 25 years after the groundbreaking ceremony, commending the Minister of Niger Delta Affairs, Sen. Godswill Akpabio, for steadfastness in ending many years of renting by the commission, and the attendant profligacy.

The President, who virtually commissioned the building from the Council Chamber of the State House, said the land was acquired by the Oil Mineral Producing Areas Development Commission (OMPADEC) in 1996, and was abandoned after series of design amendments.

“In 2015, as part of our Administration’s cardinal objectives to kill corruption, some critical reforms were embarked upon, part of which was a holistic reform of the NDDC for greater service delivery for the people of the region.

“To achieve this, I reassigned the supervision of the NDDC to the Hon. Minister of Niger Delta Affairs for administrative efficiency. Second, was the appointment of Forensic Auditors to review the operations of the Commission from inception to 2019 and to ensure that the appropriations made to the NDDC are commensurate with what is on the ground,’’ he said.

While commending the minister for ensuring the historic completion of the building, President Buhari urged the management to commit the amounts used for renting to more rewarding benefits.

“I, therefore, use this opportunity to commend the Honourable Minister of Niger Delta Affairs, Senator Godswill Akpabio, for providing the required leadership that saw to the completion of this edifice.

“Today, we are handing over to the people of Niger Delta, a befitting Head Office Complex for present and future use. Consequently, huge yearly rentals would now be saved and deployed to other areas of needs in the region.

“I commend the management and staff of the NDDC for staying the course and keying into the Reform Agenda of our Administration. I am particularly pleased to note the cordial relationship between the NDDC and the National Assembly and hope that this relationship will be strengthened further for the benefit of the people of the Niger Delta region,’’ the President added.

The Governor of Imo State, Hope Uzodinma, thanked the President for the completion of the building, promising that the nine governors under the NDDC would continue to support his bold steps in development.

In his remarks, the Minister of Niger Delta Affairs noted that the completion of the NDDC building signals the President’s commitment to the development of the oil producing region, and ending of activities of corrupt public officials, who also negated the connection of the offices to national grid over many years in order to seek rent on fueling of generators.

“You will be remembered by this gesture, and generations will never forget you,’’ the minister said.

Sen. Akpabio urged leaders, traditional rulers and youths in the region to support President Buhari’s administration so that it would complete most of the abandoned projects by previous administrations, which include the Second Niger Bridge, warning that the persistent fights and petitions among leaders must be shelved for development.