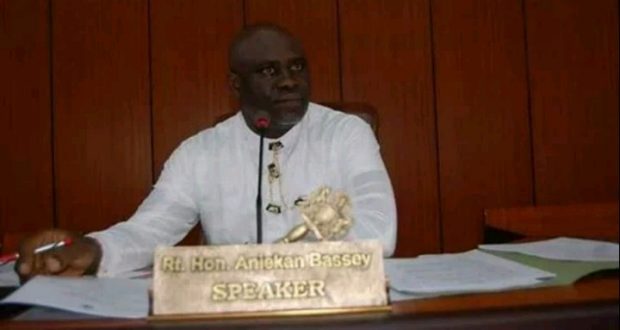 The Speaker of Akwa Ibom State House of Assembly, Rt. Hon. Aniekan Bassey, has advised political office holders, to embark on projects that will better the lives of those at the grassroots.

Speaker Bassey gave the charge on Sunday, when he graced the Thanksgiving Service of the Councillor representing Southern Uruan Ward One, Hon. Iniobong Asuquo, at The Apostolic Church, Ikot Akan Assembly, Uruan LGA.

Speaking further, Rt. Hon. Bassey expressed delight over the strides recorded by the Councillor and urged other elected and appointed political office holders from the area, to take a cue to from Hon. Asuquo, initiating people-oriented projects.

He cited payment of school fees and drilling of boreholes, as some projects that could be taken up by political office holders at the grassroots and said he was at the event to encourage other Councillors in the area to up their games.

The Assembly helmsman further thanked the people for their support since his emergence as a Lawmaker and subsequently as Speaker of the House of Assembly, and promised to justify the confidence reposed on him by Akwa Ibomites.

Also speaking, Chairman of the Akwa Ibom Roads and other Infrastructure Maintenance Agency (AKROIMA), Prince Godwin Ntukudeh, lauded the Councillor for acknowledging God in his life.

Prince Ntukudeh, while thanking God for the emergence of Rt. Hon. Aniekan Bassey as Speaker of the 7th Assembly, maintained that Uruan Local Government Area is blessed to have a peaceful man as Speaker and sued for more support from the people, to enable him succeed in his new assignment.

On his part, the Chairman of Uruan Local Government Council, Hon. Henry Udofia, showered encomiums on Hon. Ini Asuquo for remaining focused and dedicated in his service to the people of Southern Uruan Ward One and used the opportunity to congratulate Rt. Hon. Aniekan Bassey on his emergence as the number three citizen in the State.

The celebrator appreciated God for His love and mercies and further thanked Governor Udom Emmanuel for his benevolence, which he noted has changed his life.

He thanked the Stakeholders and people of Uruan for their support and saluted Rt. Hon. Bassey for honouring his invitation.

Asuquo however called on government to restore electricity to the area and also made a case for the rehabilitation of Ikot Akan-Adadia Road, to further boost economic activities.

Earlier in his homily tagged “And Asa Pleased God”, drawn from 2nd Chronicles 14 vs 1-15, the District Pastor of The Apostolic Church, Ikot Akpa Ekan District, Pastor Daniel Akpan, admonished Christians to always appreciate God in every situation they find themselves.

He said when Christians reference God, He would take away strange gods and give them rest on every side.

The event which featured prayers for Uruan LGA, Speaker Aniekan Bassey and Akwa Ibom State, was graced by past and serving political office holders, within and outside Uruan Local Government Area.

Previous: Dozzier Newspaper and Magazine Felicitates With Emmanuel Sam On Appointment
Next: Nigeria, Buhari and the Common Man