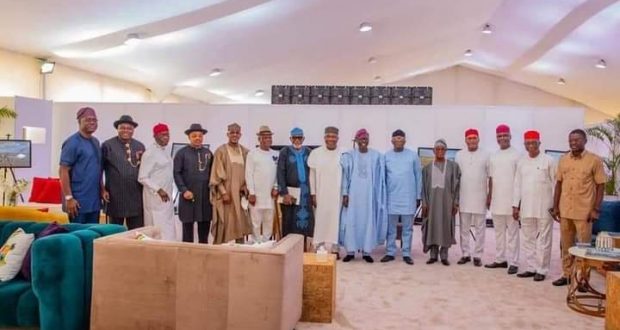 The meeting of the Southern Governors Forum has ended in Lagos with a firm position for rotational presidency between the North and South in the next Presidential election in Nigeria.

The Chairman of the Forum and Governor of Ondo State, Mr. Rotimi Akeredolu, who briefed newsmen after the meeting said it was unanimous in the meeting that the next President of the country should come from the South.

The Southern Governors Forum also rejected the 3% oil revenue proposal by the Senate for host communities in the Petroleum Industry Bill but adopted the 5% proposal by the House of Representatives.

The meeting which was well attended by Governors from Southern Nigeria also rejected the removal of electronic transfer of election results in the proposed Electoral Act Amendment bill.

Below is the full text of the Communiqué ;

COMMUNIQUÉ ISSUED AT THE CONCLUSION OF THE MEETING OF THE GOVERNORS OF SOUTHERN NIGERIA AT THE LAGOS STATE GOVERNMENT HOUSE, IKEJA, LAGOS STATE, ON MONDAY, 5TH JULY, 2021 NIGERIA.
The Southern Governors Forum at the end of the meeting held on Monday, 5th July, 2021 reviewed the situation in the Country and focused on the current security situation, constitutional amendment, Petroleum Industry Bill (PIB).
Rising from the meeting, the Forum agreed on the following:

Previous: Obasanjo To Form A New Party As Alternative To PDP, APC Ahead Of 2023
Next: IKOT EKPENE SENATORIAL DISTRICT WOMEN REAFFIRM SUPPORT FOR GOVERNOR EMMANUEL