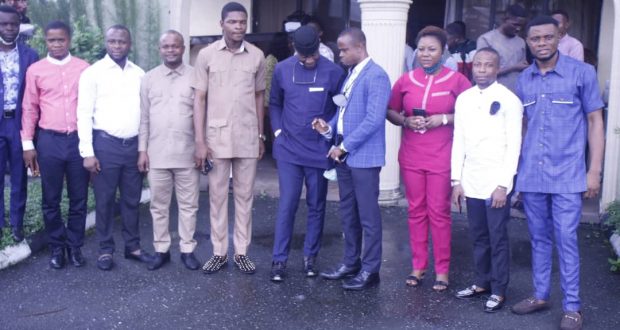 South South youth Assembly of Nigeria, a body of professional youth from Niger Delta region last week held stakeholders congress and inaugurated new executives that would pilot the affairs of the body for three years.

The group, geared towards youth development in the Area is a non political organisation aimed at promoting peace and fostering unity as well as serve as a training ground for next generation leaders.

Addressing participants at the congress, a multi talented professor of Theatre Arts in the University of Uyo, Prof. Effiong Johnson, urged youth to see their present condition as a training ground where they can leverage on future opportunities. He harped on efficient and effective time utilization, explained that a journey to greatness is filled with obstacles.

He said ” I value time in my life. Time should be effectively utilized. No body embarks on a journey to success without hurdles, but it takes determination, focus and boldness to succeed in life. I want you to subject yourself to mentorship, which is the hallmark of good leadership.”

The former Dean of Student Affairs further explained that, lack of capacity is what brings about failure in governance. He charged the youth to build capacity first before accepting any responsibility.

On his part ,one of the elected officials, who is representing Akwa Ibom North-West, Comrade Victor Thompson, while speaking to Dozziernews said the body will work to change the mentality of young people towards leadership and position them at various leadership positions in order to learn the rudiments of governance.

The University of Uyo graduate, said the youth have the competence to deliver but lack opportunity to test run their abilities. He called on government at all levels to give the youth opportunity to showcase their leadership prowess even at the lowest level, as any hidden talent not used is a waste to humanity.