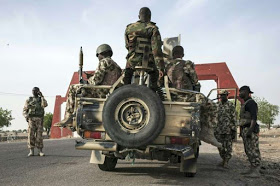 Nigerians soldiers stationed at Ayadeghe in Itu Local Government Area of Akwa Ibom State, have apprehended 17 suspected militants from Ikot Offiong in Cross River State.
The soldiers were said to have also recovered many sophisticated arms and ammunition from the suspects.
Our correspondent learnt that the arrest and recovery of the weapons followed a raid on militants’ hideouts, along the bank of the river in the disputed area.
The suspected militants, said to be aged between 26 and 40 years are alleged to be responsible for incessant raid on the coastal community of Oku Iboku, whom they have been locked in an age long boundary dispute.
A resident of Ayadeghe, Mr. Okon Edet, told our correspondent that the suspected militants were later conveyed in military trucks, escorted by heavily armed soldiers over the bridge towards Calabar.
Items said to have been recovered from them include many 2 grenade launchers, 36 guns including Kalashinkov rifles, pump actions, double barrel guns and two big ghana must go bag, filled with different calibres of ammunition and assorted charms.
Due to the sophisticated arms cache, many now suspect them to be hired militants from Delta, Bayelsa and Rivers State.
Assistant Director, Public Relations Brigade 2, Nigeria Army, Mr. Umar Shuaib, when contacted, said he would get back to our correspondent.
2017-05-21
dozzier