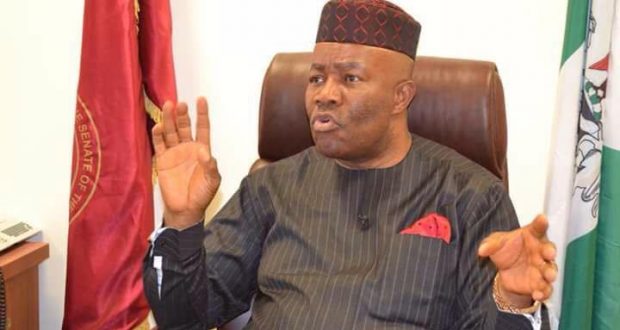 Senator Akpabio denies rift with Governor Emmanuel, applauds him on the killing of notorious militant

The Senate Minority Leader and Senator representing Akwa Ibom North West Senatorial District, Godswill Akpabio has denied media speculations that he was embroiled in a rift with his successor, Governor Udom Emmanuel describing such insinuations as the handiwork of political jobbers.

Senator Akpabio in a statement in Abuja by his Special Assistant on Media, Anietie Ekong said so far he was satisfied with the performance of Governor Emmanuel and added that he cannot be engaged in a feud with an administration that Ikot Ekpene Senatorial District played a significant role on its emergence.

“It is obvious that the concerns raised by the Senator during the end-of-the year stakeholders meeting organized by the Deputy Governor that all was not well was misunderstood and political jobbers sought to feast on it.

“What the Senator said was that their House should be put in order so that the votes from Ikot Ekpene Senatorial District would be put intact for Governor Emmanuel in the next election.

“Senator Akpabio is satisfied that the areas of concern raised by the stakeholders which were further explained by the Governor during the follow-up meeting with him to the satisfaction of the stakeholders present at the meeting were receiving the attention of the government,” the statement said.

Senator Akpabio commended Governor Emmanuel for working with security agencies to eliminate a notorious militant, Akaninyene Jumbo alias Iso Akpafid who had killed many citizens of Ukanafun LGA and its environs and rendered many refugees in the last one year, which he noted was another area of concern by stakeholders of Ikot Ekpene Senatorial District. He said with the killing of the hoodlum peace would return to that part of the Senatorial District.

The statement said Senator Akpabio had consistently pointed out that Ikot Ekpene Senatorial District would stand by Governor Emmanuel and pledged the support of the people towards the reelection of the Governor with its over 500,000 votes.

The release cautioned those making inciting statements to create a wedge between the Senator and the Governor to desist from it as they were only doing so for their personal benefit. He sued for peace in the state and advised politicians to desist from politics of hatred and blackmail which would not augur well for the unity of the state.