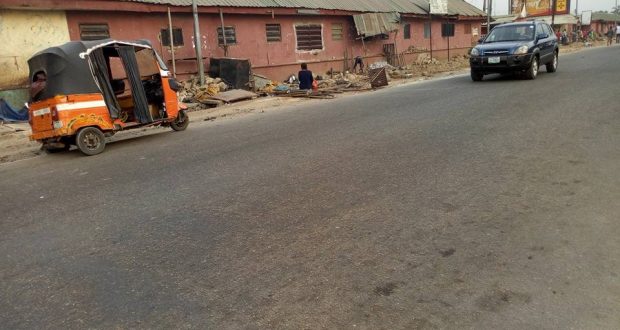 The Executive Chairman of Uyo Local Government Council, Elder Imoh Okon earlier this morning earned praises and commendations from Akpan Andem market traders and residents of the state capital as well as the general public on the new look he has given the market.

Since his assumption of office in December last year, Elder Imoh Okon has been working restlessly to return the market to its original state as a city market.

Apart from opening up access roads within the market, the Chairman has been championing sanitation course in the market with the latest being donation of Waste Evacuation Truck for daily removal of waste from the market.

Having restored the market to its true shape, Elder Imoh Okon this morning relocated yam, chicken and fresh fish sellers who took over the entire stretch of the Udo Umana axis of the market. Until the relocation of these sellers, free flow of traffic along the axis was only imaginary, this reporter reliably reports.

When this reporter visited the Udo Umana axis of the market this morning, it was seen that all kiosks and shade attached to the wall of the market have been demolished thereby giving the market a new look and unhindered movement of vehicle and persons along Udo Umana Street and Johnson Street.

Speaking with newsmen, the President of Yam Sellers Union, Okon Sunday Udobong expressed happiness on the Chairman’s effort in bringing back the market to life. He said many used to think that the market cannot be sanitized considering the inability of previous governments to reposition the market.

While applauding the Chairman, the union leader said the new location given to them is more strategic and will boost their patronage and sells.

Also speaking the former President of Chicken Sellers Union, Joseph Abang said the relocation to the new space is a welcome development and called on the Chairman to consider expanding the space to accommodate the number of chicken sellers.

In his part, the head of Sanitation Committee of the market, Mr. Solomon Peter popularly known as ‘Tewa’ described the Chairman’s restructuring of the market as uncommon, saying that it is the kind of development the market traders and the people of Uyo were yearning for.

While calling on all traders to corporate with the Council boss in giving the market a facelift, Tewa said the government of Elder Imoh Okon is sensitive to the plight of the traders and is committed to delivering quality leadership inline with his 4-point agenda for the people of Uyo in general.