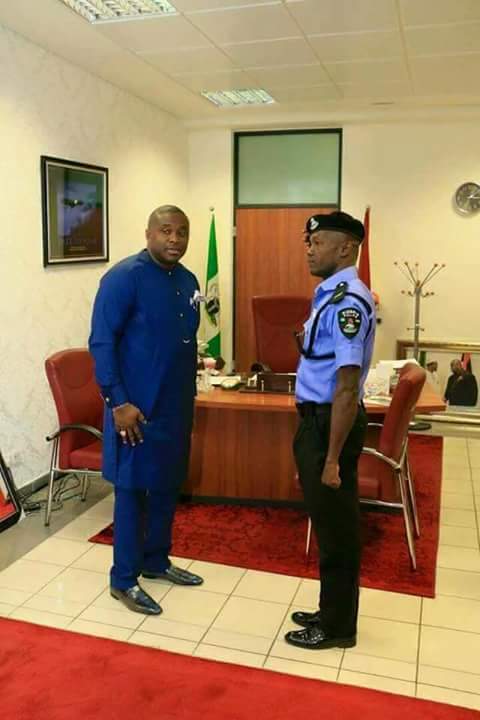 A police officer from Akwa Ibom State, Celestine Williams who was wrongfully dismissed from the Nigeria Police Force 21 years ago has been re-instated thanks to a petition submitted on April 13, 2016, to the Senate by the senator representing Akwa Ibom North East Senatorial District, Senator Bassey Albert Akpan, for his re-Instatement.
In a petition submitted to the Senate through Senator Albert, Celestine Williams, then a corporal, said in 1996, he was listed in the police daily order to join the team that investigated a highly placed Nigerian businessman, who later used his connection to frustrate his arrest and got Williams and his colleagues arrested and manhandled.
According to him, they were arrested and taken to Lagos and detained for 11 months at Onikan Police . When the then AIG Alhaji Musa Isa (now retired) went to Onikan Police Station on visiting rounds, he ordered their release after
listening to their side of the story. However, when Celestine and his colleagues got back to their stations, the new Officer in Charge refused their re-documentation, and decided that they should no longer be paid until they clear themselves from the top..
According to Celestine, all attempts to get him re-instated failed even after there were two signals from the police authorities signifying that he was illegally dismissed without trial.
This was the case with Celestine for over 21 years when he he wrote Senator Bassey Albert to intervene and impress the police authorities to re-instate him.
In a petition submitted to the Senate by Senator Bassey Albert and dated April 13, 2016, the distinguished senator requested the senate to intervene in view of the fact that the police wireless message attached to his request reveals that the appellant was not tried but dismissed for an undisclosed offence. The Senate later referred the matter to its committee on Ethics, privileges and Public petitions for further investigations. The committee after its investigations recommended the re-in statement of Celestine Williams and his promotion from the rank of corporal to the rank of ASP, which is the current rank of his mates in the police force.
A highly excited Celestine today visited Senator Albert to thank him for his doggedness in seeing to his re-instatement., and prayed God to continue to lift him from glory to glory.
© Idorenyin Umana
2017-06-14
dozzier

Previous: Rise and protect the Coconut Refinery in your area” – Speaker Luke charges youths
Next: Kidnapper Evans Names His Victims