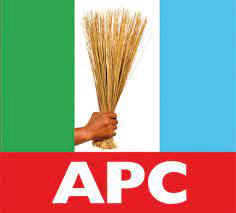 Passes vote of no confidence on Udoedehe

Addressing a press conference, Tuesday, 3rd August 2021 at the NUJ Press Center, Uyo, Group Captain Sam Enwang and Rt. Hon. Eseme Eyiboh who led the SEC delegation comprising of 20 serving chapter chairmen and secretaries, ward leaders and Youth leaders of the party at various levels in the state, hinged the decision on the fallout of APC Ward Congress held in the State last Saturday.

SEC, as espoused in the APC constitution is an organ of the party that comprises of serving and former president(s), governors, National Assembly members, members of the state Assembly, chairmen and secretaries of the party at the local government level.

Justifying the rationale behind the suspension, Eyiboh said Dr Ita Udosen and his cohorts acted in contravention of the party’s guideline for the Ward Congress.

He said according to the guideline, the Ward Congress was to take place at the various ward centers through direct election.

He however regretted that the suspended Ag. Chairman chose to observe the guideline in breach, thereby denying members of a level playing field.

Eyiboh also used the medium to call on stakeholders of the party such as Sen. Godswill Akpabio, former Governor of Akwa Ibom State and Senator, Sen. Ita Enang, Sen. Udoma Udo Udoma both past members of the National Assembly to join forces with other stakeholders to prevail on the national leadership of the party to send a more credible team to the state to conduct an acceptable and credible Ward Congress.

He said, already SEC had written both the Independent National Electoral Commission (INEC) and security agencies intimating them to disregard any result that someone sat at the comfort of his palour to write and send to them.

Speaking on behalf of Chapter Secretaries, the Chairman, Forum of APC chapter secretaries, Paul Ibara passed a vote of no confidence on the Ag. National Secretary of the party Caretaker Committee and Extraordinary Convention Committee, Sen. John James Akpanudoedehe.

Ibara said ever since Udoedehe was appointed Ag. National Secretary, his main agenda has been that of tearing the party in the state apart for his selfish interest.

Ibara further disclosed that ward Congress did not take place anywhere in Akwa Ibom State last Saturday, adding that even in Essien Udim where he is the chapter secretary of the party, no material was taken to the center, the same fate he said his colleagues from other local government also suffered.

Previous: WHY WE ARE PRIORITIZING JOB CREATION BY OSINBAJO
Next: USDMPF Lauds Gov Emmanuel On Leadership Strides, declears support for MPM …congratulates Akwa United on Victory