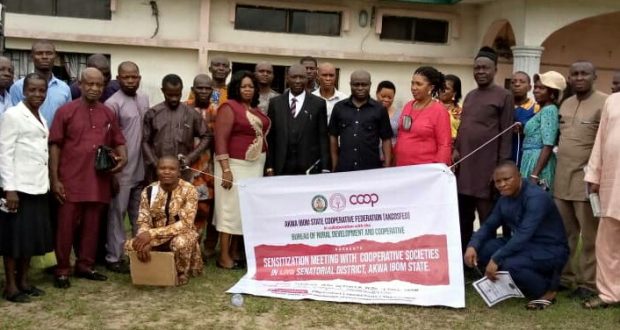 The Akwa Ibom State Cooperative federation limited (AKSCOFFD), the umbrella body and mouthpiece of all cooperative societies in Akwa Ibom state has reminded the state government as well as private entities of the need to commit financial resources into cooperative ventures that will in turn contribute to economic growth to revamped the economy which has been down for so long as a result of Covid-19.

Mr. Robinson said that, cooperative societies has the capabilities to turned around the economy of Nigeria for better, going by the number of persons it employed in productive ventures.
He stressed that government should take cooperative business very serious because the sector elevates poverty in the world.

According to him, “Cooperative societies are veritable platforms for economy growth, most great nations raise to where they are via cooperative enterprises, and a good number of them give top priority to the activities of its cooperative business as a driving force of their economy.” He said.

Robinson, advised government to channel more funds into cooperative enterprise by supporting existing ones, especially in the agricultural sector with finance, provide an enabling environment and technical know-how to revamped our economy.

He also enjoins people to come together to think of cooperative business as a viable and feasible means of making impacts and creating wealth for themselves.
However, he said that AKSCOFFD in collaboration with Bureau of Rural Development and cooperative society would worked with all relevant bodies to enhanced and strengthened cooperative business in the state by sourcing for soft loan for them to thrived, while calling on over 2000 registered cooperative societies to be transparent in their dealing with members.

On his part, Director of loan Bureau of Rural Development and Cooperative Society in Akwa Ibom state Mr. Monday John, called on cooperative bodies to walked as a team in order to achieved their objectives. He urged AKSCOFFD to have a comprehensive database of all functional cooperative business in the state to helped government on how to assist them, he revealed that Governor Udom Emmanuel has indicated interest in assisting them growth their businesses most especially cooperative has embarked on feasible projects.