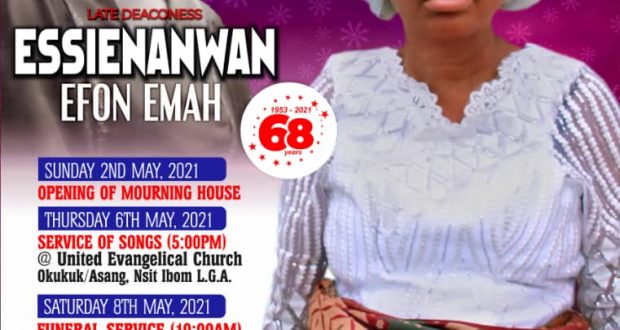 A release from the family revealed that the funeral rites which started with opening of mourning house on Sunday, 2nd May will be spiced with other activities to mark the life of the retired civil servant and Christian mother.

On Thursday, 6th May, family, friends and sympathisers will gather at the United Evangelical Church, Okukuk/Asang by 5pm for the service of songs.

While on Saturday, 8th May, the remains of Deac. Emah will be interred to mother earth. The funeral service will be held at QIC primary school, and will be conducted by the United Evangelical Church, Okukuk/Asang Ededom 11 Superintendency, Uyo Area Conference.

Also, on Sunday, 9th May, friends and sympathisers will join the Emah’s family for a thanksgiving service at United Evangelical Church, Okukuk/Asang, Nsit Ibom.

Meanwhile, the eldest son of late Deac. Emah, Rev. Ibup Emah, has described his late mother as a ‘kind, loving and peaceful mother.’

Eulogizing his late mother, Rev. Emah said, ”the radiance of her love touched everyone that came around her. She was accommodating, sociable and hospitable. She was an epitome of beauty and elegance. Mummy was a generous and compassionate. She was a Godly woman who lived for God and touched many people positively in her lifetime. She has left an indelible mark on the sand of time and has created a vacuum that will be difficult to fill.”

Late Emah has left behind by a husband, Elder Efon Emah, seven children, nine grand children and other relatives to mourn her transition.

Previous: PANDEF Mourns Late Sen. Etang Umoyo …described him as an icon of no mean repute who lived an upright life
Next: GOVERNOR EMMANUEL PARTNERS FG ON REACTIVATION OF ALSCON