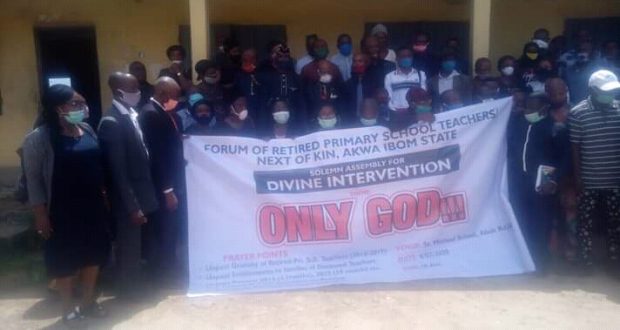 It was indeed a moment of tears, pains and lamentation for retired Primary school teachers and next of kin in the state on Wednesday July 8th, 2020, as they gathered in their numbers at St. Michael Primary school, Abak road, Uyo on a Solemn Assembly for divine intervention on their long overdue pension arrears and gratuity, which the government has continued to pay deaf ears despite their plights and effort, after serving the state meritoriously for 35 years.

Speaking during the intercessory prayers, the leader of the group, Rev. Felix Ime while condemning in strong terms government attitude in handling the issues, said their emoluments is their right and not a privilege as such should not be neglected.

Rev. Felix, while given analyzing of the unpaid benefits, explained that, the government has not pay their gratuity since 2010, non payment of next of kin entitlements for deceased teacher, non refund of 7.5% pension contribution, non payment of pension arrears for 2014, 2015 and 2016 and irregular payment of pension to affected teachers. He noted that, the forum has written 64 official letters to the Governor, Mr. Udom Emmanuel between 2016 to 2020, 8 letters to the current Head of Service, Elder Effiong Essien and has staged peaceful protest at different locations just to drive home their demands but all efforts has prove abortive.

According to him ” Governor Udom Emmanuel has deliberately refused to listen to our cry, that’s why we’re seeking for God intervention, let me also say that i will rather go to jail than surrender to any form of gimmicks or encumbrance”.

On the issue of data, the peace ambassador hinted that, all documentation has been completed even before retirement, express shocked while Governor Udom Emmanuel who is an ordained Elder of Qua Ibo church would be so heartless to retired teachers, even when the money can’t be compared to his meal ticket.

addressing the retiree, Akwa Ibom born, Lagos based, human right lawyer, Inibehe Effiong, on his part said the government has neglected a very important aspect of not taking care of those that taught them, he described the act as pure wickedness, and inhumanity to man, Effiong added that, not paying teacher has nothing to do with paucity of funds as Akwa Ibom have enough in her treasury.

In his words ” if the governor, his commissioners and all the Assembly members do don’t pray or go to court before their salary are paid, then the government has failed, i will make sure government house is been occupy or something drastic is done for their money to be paid” Effiong said, while assuring the affected teachers of his readiness in fighting the battle to the end.